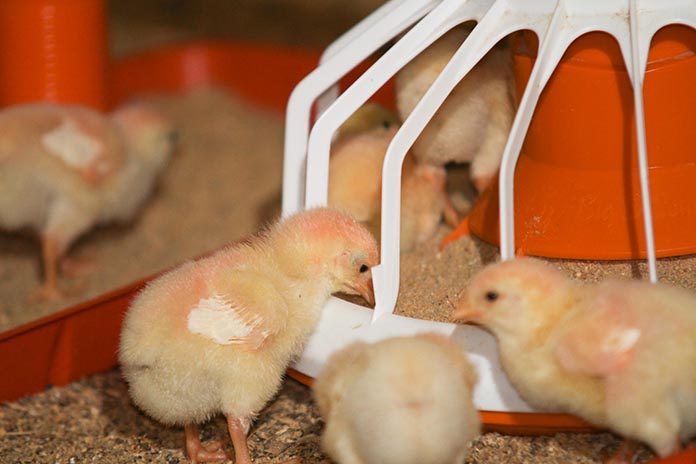 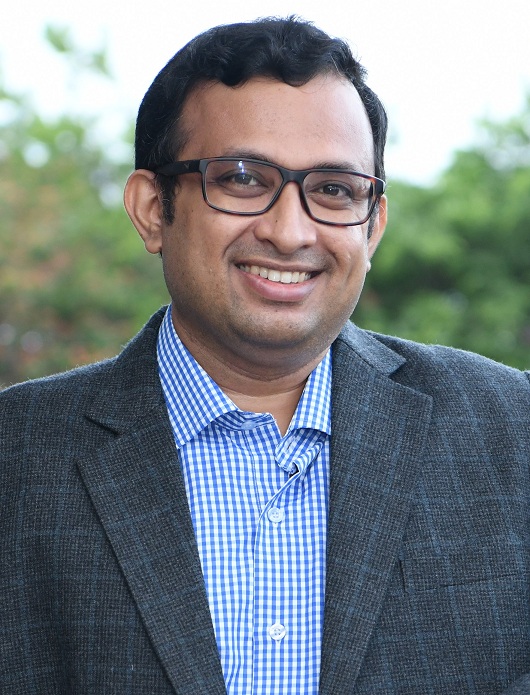 Feed efficiency is one of the main factors used for the improvement of chicken production. In addition, feed efficiency has an important economic impact on the competitiveness of the poultry sector. Another important feature in modern broiler farms is the correct management of diseases for maintaining productivity and economic viability. The challenge of increased feed efficiency and potential health risks becomes essential to the survival of the intensive broiler production. The ban or limited use of antibiotic growth promoter in some regions of the world has forced the investigation of alternative products which can modulate the intestinal flora beyond the stomach barrier, obtaining comparable growth performance in the animal. Organic acids as well as aromatic compounds have been widely used as antimicrobials in food safety and as feed additives. An important quantity of studies in which the efficacy of organic acids in improving feed efficiency and growth have been clearly showed (Khan and Iqbal, 2016; Huyghebaert et al., 2011). The limiting factor in the use and efficacy of these compounds is the need to reach the intestine in order to exert their antibacterial activity, without being absorbed too rapidly after leaving the stomach.

Which organic acid to choose?

For feed decontamination, formic acid is given as the best antimicrobial organic acid. It is not the best choice for an intestinal microorganism target. The pKa value of formic acid is lower than 4; it is a small molecule and quickly metabolised. Benzoic acid has a pKa value of 4.2 and the phenolic part is an efficient damaging agent for the bacteria cell. Benzoic acid is a solid molecule and also less corrosive and safer to handle compared to formic, propionic or lactic acids. Figure 1 shows the minimum inhibitory concentrations of benzoic acid on different bacteria (not published data). As it is the general case for organic acids, gram-negative (i.e. E. coli, Salmonella) are much more inhibited than gram-positive bacteria. 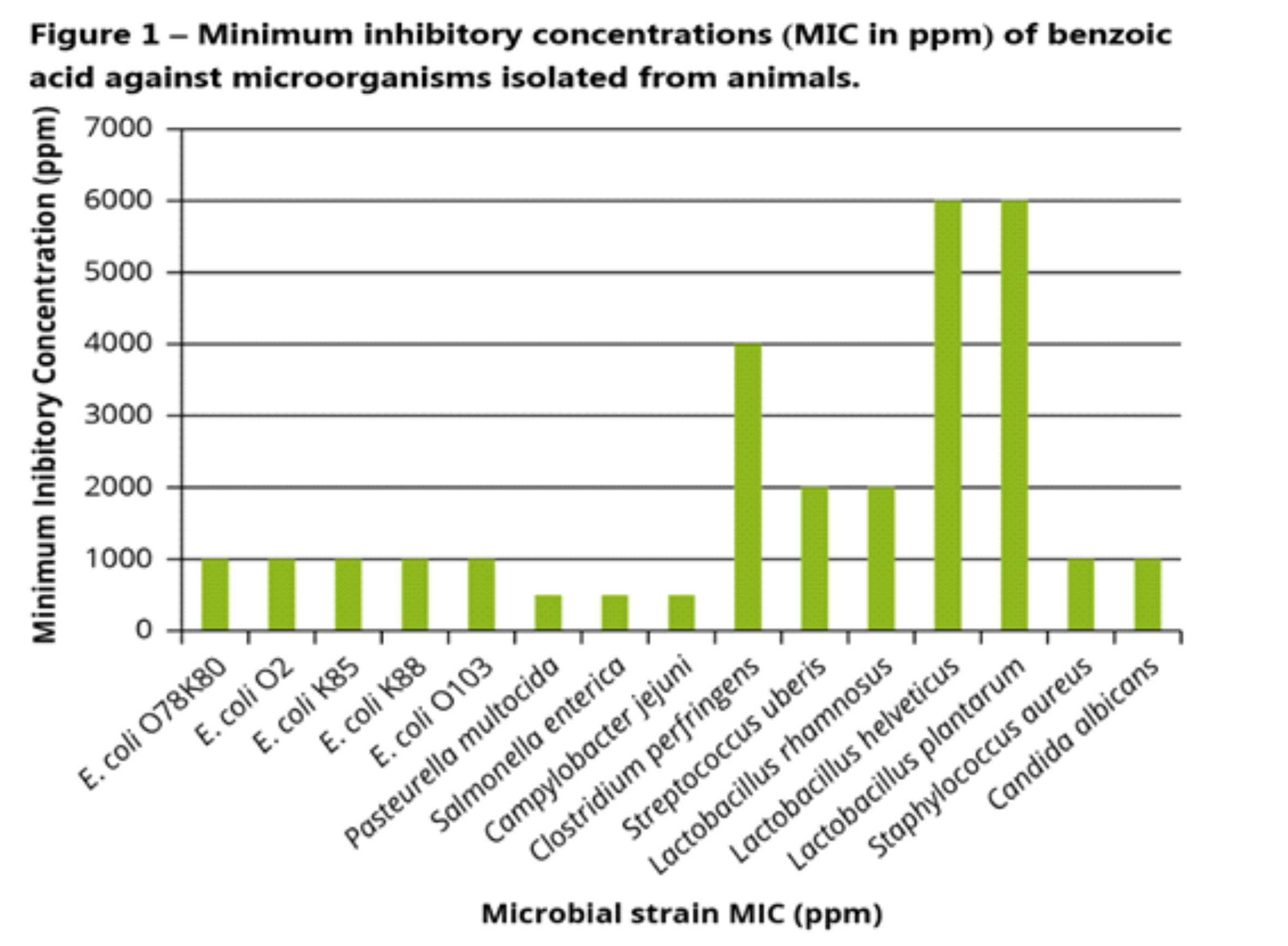 Amongst the gram-positive bacteria, the “beneficial bacteria” (i.e. Lactobacillus spp.) is less sensitive to the antibacterial effects of benzoic acid. It has already been reported that benzoic acid plays an important role lowering numbers of many pathogenic bacteria as Campylobacter jejuni, Escherichia coli, Listeria monocytogenes and Salmonella enterica (Giannenaset al, 2010).

TypicallyBenzoic acid is an organic acid that modify the intracellular pH of gut bacteria and shifts gut bacterial profile by creating an environment that minimizethe proliferation of pathogenic bacteria (yousaf et al., 2016). Despite benefits of organic acids, a major constraint associated with organic acids is their rapid metabolism and absorption in the proximal parts of the gastrointestinal tract, which results in  low concentrations in the distal parts. Thus, the mode of action for the bacteriostatic and bactericidal activities of free organic acids are questionable (Hume et al., 1993; Thompson and Hinton, 1997; Ricke, 2003; VanImmerseel et al., 2006; GoodarziBoroojeni et al., 2014b).

To reach antimicrobial concentrations in the distal intestine of poultry, it would be necessary to increase the level of organic acids dramatically in the feed, causing decreased feed intakes. Therefore different attempts have been made to protect organic acids from dissociation and absorption in the proximal intestine by microencapsulating the active compounds in a matrix which would lead to releasing the active compounds in the distal parts of the gut (Yousaf et al, 2016).Novus has used a patented technology called Novus Premium Blend consisting of a protective vegetable fat matrix embedding the active substances which allows benzoic acid to be released slowly throughout the intestinal tract and modulating the gut microbiota. 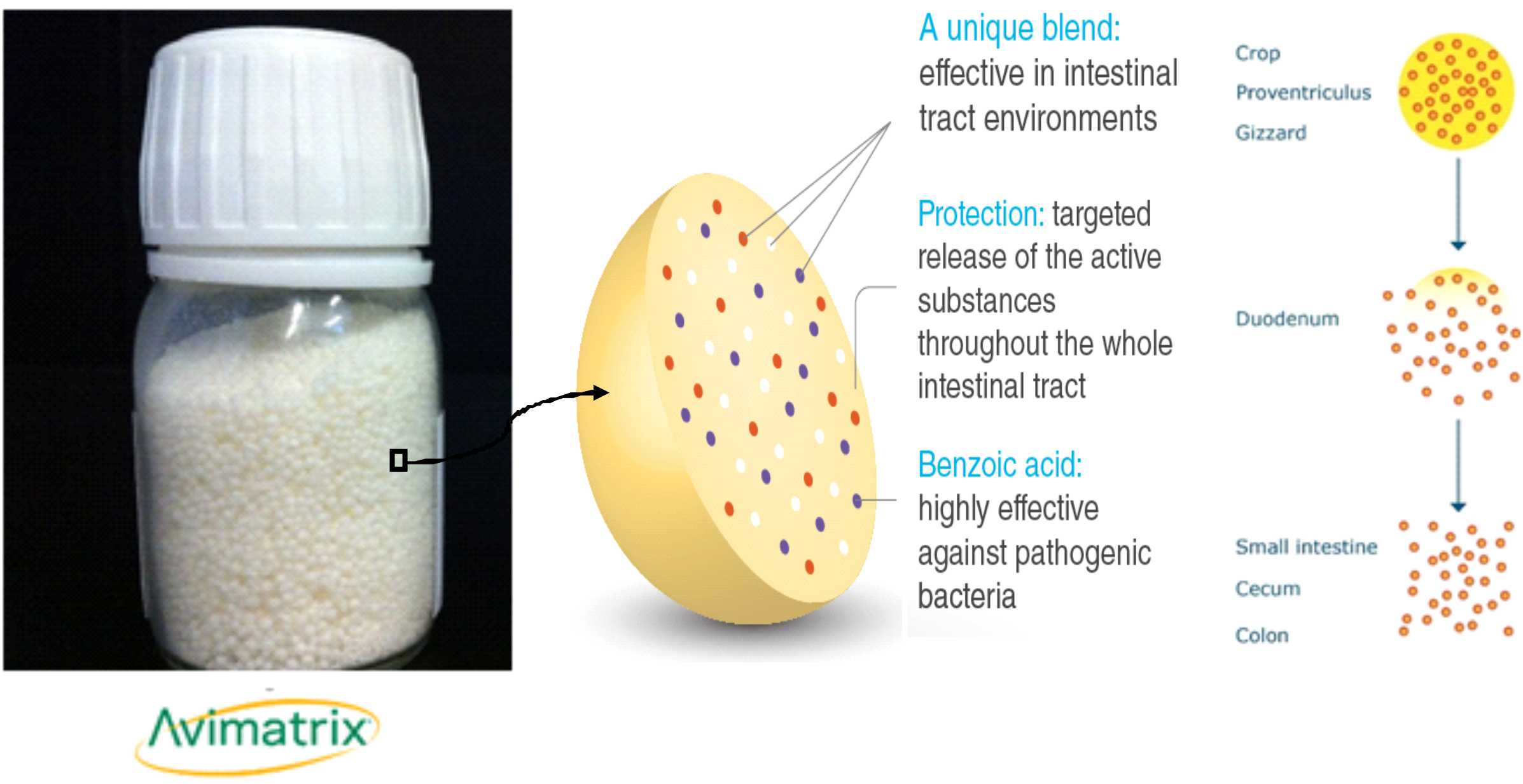 AVIMATRIX®® is a blend of nature identical flavoring compounds and preservatives processed by Novus Premium Blend Technology with a high Benzoic acid concentration. It has a stabilizing effect on gut microflora which offers cost effective performance enhancement. This encapsulation through Premium Blend Technology has shown the control release of Active Ingredients (AI) in the intestinal tract when compare with free Benzoic acid.

L. reuteristimulates the development of longer villi and significantly deeper crypts, specifically in the ileal region of the gut of young chicks. This enhanced ileal mucosal development caused by L. reuterioccurred in turkeys as well, and the effect was retained until the birds reached market age.AVIMATRIX® also has been shown to increase the ratio of Lactobacilli vs Escherichiaspp throughout the intestinal tract and thereby positively alters the microbial balance of the GIT.

supplementing broiler diets with a protected benzoic acid (AVIMATRIX®) embedded in vegetable fat can positively impact the intestinal microflora by reducing coliform and clostridia counts in the gut and subsequently improve footpad health and litter condition. Because of effectuating an overall better gut health condition, this protected benzoic acid increases final bird weight and feed efficiency resulting in a considerable return on investment. The efficacy and consistency of results showed by the application of this product are related to both the mode of action of the active compound (benzoic acid) against intestinal pathogenic bacteria and its protection technology, which allows the active substances to be released throughout the entire bird’s intestinal tract. Thus, together with a proper farm management, this protected benzoic acid can be a powerful, cost-effective solution to manage intestinal health challenges and animal welfare ensuring a profitable poultry production.