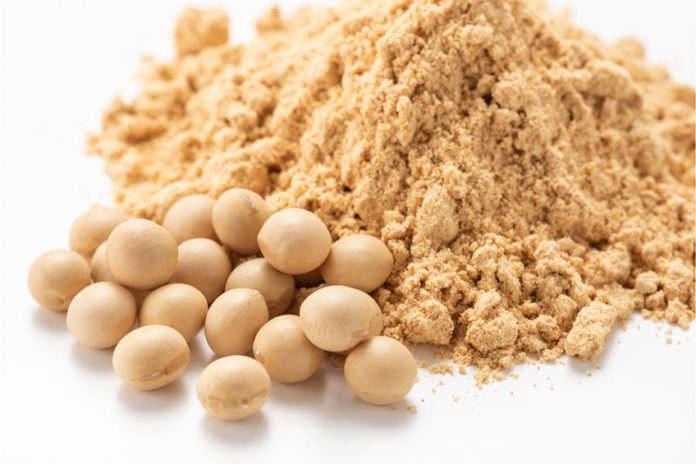 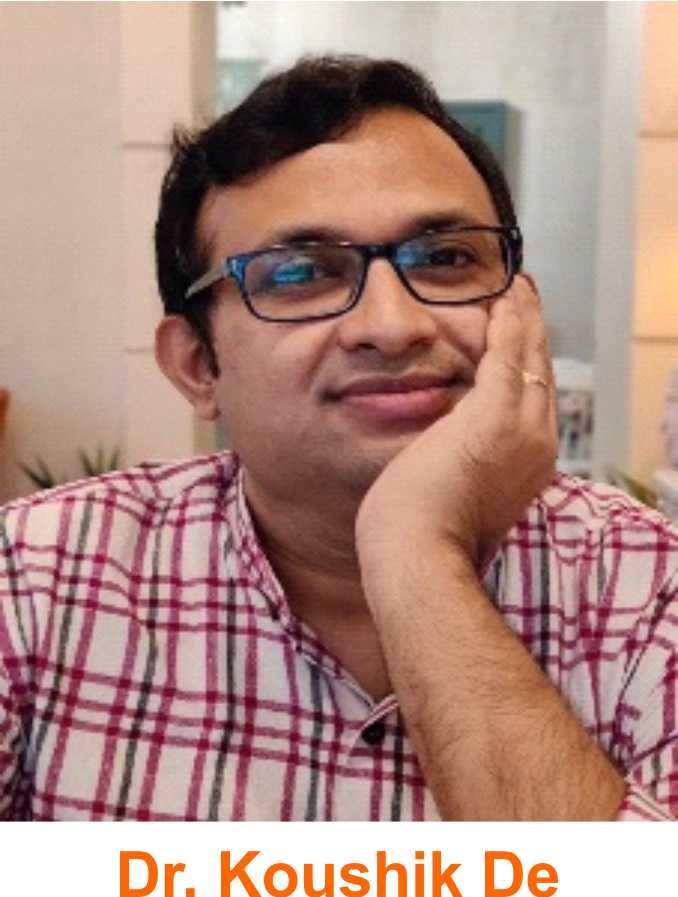 As global animal production has rapidly shifted towards reduced Antibiotic free, “Gut health” has become a popular expression and all-encompassing concept in the scientific community. The gastro-intestinal tract must provide a barrier function protecting against harmful environmental elements (e.g. toxins and pathogenic microbes), while simultaneously permitting appropriate nutrient absorption. Successful animal performance depends on the interplay between the intestine, microbiota, diet, and a multitude of environmental factors.

The shift to antibiotic free production or better gut health often results in the increase of soybean meal inclusion as there are limited in the number of efficacious protein sources that successfully reduce soybean meal content. Soybean meal is the most widely used major protein source in poultry production across the world. However, SBM contains various anti-nutritional factors that may affect intestinal homeostasis and impair nutrient utilization in poultry. The main anti-nutritional factors in SBM, are trypsin inhibitors (TI), oligosaccharides, such as raffinose and stachyose, and the antigen Glycinin, β-conglycinin and Lectins. Diets that include high levels of soybean meal contain proportionally higher anti-nutritional factors and may pose the risk of impaired performance.

Chen et al. (2016) analyzed the content of TI and Urease Activity (UA) in more than 1000 samples of SBM from all over the world and observed a high degree of variability in the reported ANF values, both within the same country and amongst different origins.

The elevated variability and its potential negative impact on performance highlights the importance of knowing the content of anti-nutritional factors in SBM for poultry formulations.

In this article, we will review mainly the role of Trypsin Inhibitors (TI) in broilers.

Why Should we care about TI?

Trypsin and chymotrypsin are important digestive enzymes that are secreted by the pancreas as the inactive enzyme precursors trypsinogen and chymotrypsinogen. Trypsin activates itself via positive feedback and converts chymotrypsinogen and other inactive enzymes into their active forms. As Tis are protein in nature and one of the most anti nutritional components of SBM, they compete to bind to trypsin therefore affecting the digestion process.They have been correlated with rapid feed passage and decrease in digestibility of broilers with a relevant economic impact.The analysis is still more expensive, complex and time consuming for TI,for this reason, other parameters are commercially used as indirect SBM quality indicators, such as Urease activity and Protein solubility.

There are two types of TI present in Soya, Kunitz TI which is larger molecule & Bowman-Birk TI which is smaller molecule. But soyabean seed contain around 14% more Bowman Birk TI than Kunitz TI.

Consequence of TI for Soya Bean and bird performance:

TI also affect the nutritive value of SBM. Because of loss of endogenous protein there is reduced digestionwhich affects the nitrogen balance, gut viscosity resulting into reduced live weight and negative impact on feed efficiency.Palliyeguru et al. (2011) demonstrated dietary soya TI elicited an increased severity of sub-clinical necrotic enteritis. When amino acid digestibility is compromised, the ileal ingesta will have a relatively high content of undigested amino acids that pass into the large intestine and cecal tonsils, where microbial fermentation will occur. C. perfringens, a pathogenic agent of necrotic enteritis, needs specific amino acids and peptides for its proliferation (Nakamura et al., 1968). 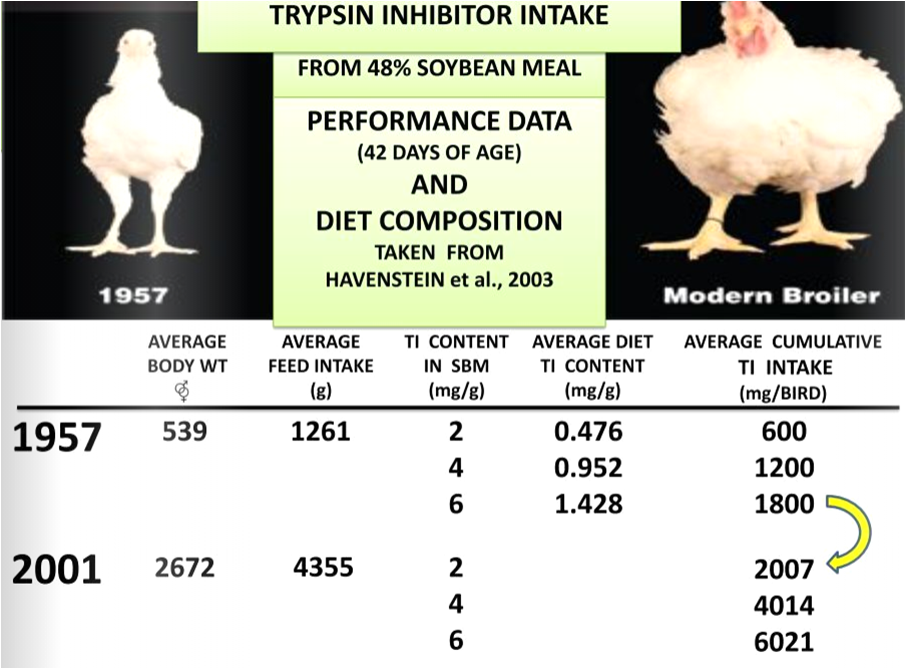 Because of improvement of modern broilers in terms of average feed intake and body weight they consume more thanthree times TI than 1957 birds considering the same amount of TI in SBM.

The effects of TIA are particularly strong in young animals. It has been shown that overcooking of soybean meal decreases digestibility of amino acids (Lee and Garlich, 1992; Parsons et al., 1992). The explanation for the decreased amino acid digestibility and reduced growth responses appear to be related to the Maillard reaction with cross-linking involved to a lesser extent.

Currently, the analytical technique most commonly used to measure soybean meal quality is protein solubility, perhaps combined with the urease test. The urease test has been used for some time as a measure of soybean meal processing. Trypsin inhibitors (TI) and urease activity (UA) are the two most relevant quality measurements for soybean products as feed ingredients for animals. TI were reported to be correlated with UA, so feed processing plants use UA as an indicator of TI in soybean meal (SBM). Chen et.al (2019) conducted a study to determine the levels of TI and UA in 414 SBM samples from 19 different countries and to validate whether TI and UA are correlated. They found that TI were poorly correlated with UA in solvent extracted SBM samples, suggesting that UA should not be used as a surrogate indicator for TI content in soybean products.

How to deal with TI in SBM? 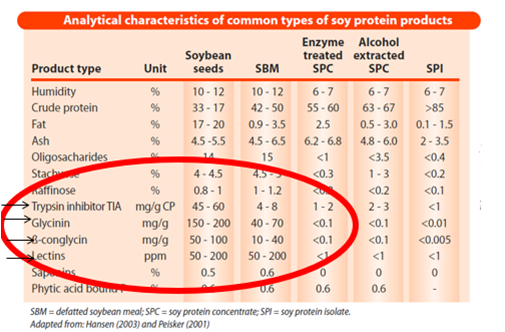 As mentioned earlier the determination in the laboratory of the TI content of SBM and its relationship with AA availability is tedious and time-consuming and provides inconsistent results. Also, the traditional processes of treating SBM can’t remove the anti-nutritional factors to a safe level. Therefore, use of exogenous protease is very effective in reducing the deleterious effect of TI in SBM.Liu et al., in 2013 conducted a study wherein they used a protease enzyme (Cibenza EP150) with different levels of TI and found that protease enzyme was able to destroy almostalltrypsininhibitors(both Bowman-Birk&Kunitz TI) present in soyabeanmeal (at 1:1 ratio) and destroysubstanciallyeven in higher concentración (2:1) of TI as well.

Wedekind et al., in 2020 showed that addition of exogenous protease (Cibenza EP150)in a diet containing FFS(with TI8.15mg/g) improved the amino acid digestibility and at the same time reduce the pancreas weight also indicating a potential amelioration of the negative effect of TI from FFS.

There are lot of scientific evidences on the negative effect of soybean trypsin inhibitors in chickens. They can not only adversely affect the productive performance of chickens but can also impair their intestinal health. The beneficial responses of protease are likely due to decreases in endogenous amino acid losses, but in vitro evidence also demonstrates the ability of protease to hydrolyze Bowman-Birk and Kunitz-trypsin inhibitor proteins.  Thus, there might be both direct and indirect mechanisms whereby amino acid digestibility is improved with proteases and so is the bird’s performances.