Maize yields are expected to increase 6 percent to a record 2.67 tonnes per hectare
Nepal’s maize output is expected to hit an all-time high of 2.55 million tonnes this fiscal year with growers embracing commercial farming techniques to fulfill swelling demand from the feed industry, according to a preliminary summer crop production report issued by the Ministry of Agricultural Development. 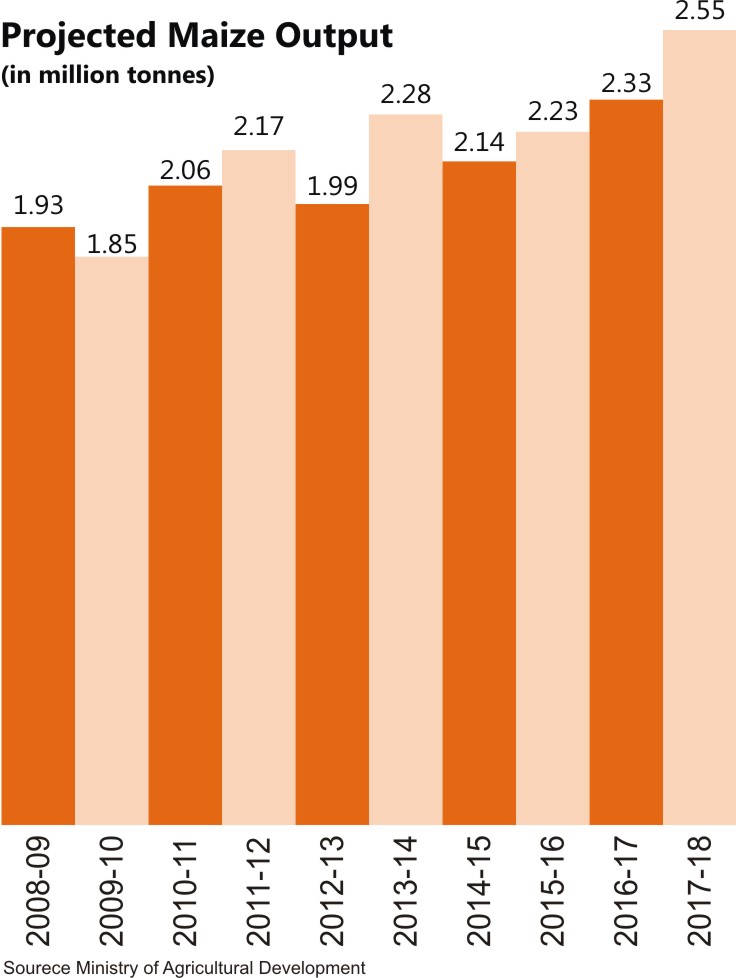 The projected production is 9.37 percent higher than the last fiscal year’s harvest. Ministry officials said that the planting season was favorable for maize growers and the supply of inputs like chemical fertilizers was normal during the growing period which helped to boost productivity.
Maize yields are expected to increase to a record 2.67 tonnes per hectare, up 6 percent from last year. The area under maize cultivation grew 3.2 percent to 954,158 hectares.
The country’s western region is likely see the highest production with output expected to reach 653,918 tonnes, up 17.5 percent. Maize production in the mid-western and eastern regions is projected to grow to 374,867 tonnes and 725,825 tonnes, up 13 percent and 9 percent respectively.
Maize is the second most important crop after rice in terms of acreage and production in Nepal. This fiscal year, despite an expected marginal drop in paddy production, a bumper maize harvest has increased the country’s overall cereal output.
Government officials and agriculture experts attribute the surge in maize production to factors like extensive use of inputs, particularly fertiliser, introduction of high-yielding hybrid varieties, favourable weather conditions and growing farm mechanization.
“These are the key factors that have pushed up maize production and productivity,” said Dila Ram Bhandari, agro expert and former director general of the Department of Agriculture.
In some instances, the per-hectare yield of hybrid varieties has reached 3.62 tonnes. “Nowadays, hybrid seeds are mostly used in the Tarai districts which has resulted in higher maize productivity,” said Bhandari, adding that proliferating feed factories had encouraged farmers to grow maize in a commercial way. “Still, a large amount of maize is imported from India to meet the demand of the feed industry.”
According to the journal Maize Research and Development 2015, published by the ministry, the poultry industry needs about 664,000 tonnes of feed annually. Maize is a major raw material in the production of poultry feed.
Maize demand is increasing at the rate of 11 percent annually in Nepal. To fulfill growing demand for milk, meat and meat products, we are importing about 45 percent of the requirement of maize from India, the journal said.
Maize is a traditional crop grown for food, feed and fodder. According to the journal, the per capita maize consumption in Nepal is 98 gm per day. At this rate, the total maize requirement for food per year works out to around 2.9 million tonnes. The deficit is met by imports.
Apart from food, the journal said that feed demand is also increasing at the rate of 11 percent annually. “There is a need for about 6.46 million tonnes of feed to keep Nepal’s poultry industry running smoothly, and domestic feed factories produce about 0.5 million tonnes of feed annually,” the journal said. “Thus, demand for maize for use as food is also shifting. Maize is in demand for use as animal and poultry feed. New types of maize-based products such as soups, vegetables and edible oils are in demand for use as food.”
In this situation, import substitution is only possible by increasing maize productivity, it said. Winter maize under rice-wheat system has been emerging as a new intervention, and it can be an option to increase maize output in Nepal, the journal said. “Furthermore, special purpose maize like quality protein maize, sweet corn, baby corn and pop corn can also be grown in accessible areas to replace imports.”
Soure: kathmandupost