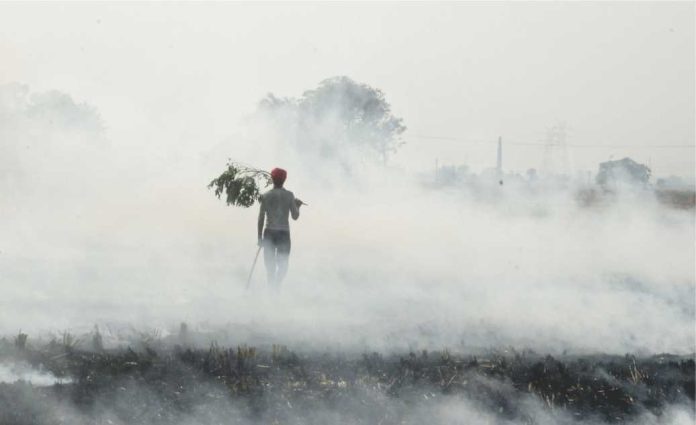 As winds slow during the winter months, a poisonous haze collects over northern India. Duringthe worst stretches, the region’s air pollution can reach multiple times the global safety threshold. Stubble burning is one of the leading causes of the smog.
Sanju, 24, who goes by one name, is among several hundred gig workers in the state of Haryana- all of them women – trying to reverse that trend. She encourages farmers to spray a white substance on their fields to decompose crop residue, rather than set it ablaze. Her work forms part of one of the most ambitious attempts to eliminate stubble burning in India.
“It’s a win-win situation for farmers,” said Dhruv Sawhney, the chief operating officer of nurture.farm, a digital platform promoting sustainable agriculture that is overseeing the project. In addition to hiring on-the-ground messengers like Sanju, his group provided the decomposer for free to 25,000 farmers this year.
Sawhney said the new organic spray, which was developed by the state-run Indian Agricultural Research Institute, has helped prevent farmers from burning over 385,000 acres of rice paddies. The low-cost bio-enzyme, called Pusa decomposer, breaks down straw and turns it into fertiliser.
Solving increasing fertilizer cost and unavailability
Over the next three years, nurture.farm plans to expand its coverage area to 5.7 million acres at an annual cost of 6 billion rupees ($80 million). Even if the company starts charging for the powder, many farmers say they would continue using it, in part because they end up saving on fertilizer costs. India, the world’s biggest grower of cotton and second-largest producer of rice, wheat and sugar, is being squeezed by a global shortage of fertilisers.
“I don’t mind spending a nominal amount on this but it should be reasonable otherwise I will again resort to my earlier practice of burning the crop,” said Anil Kalyan, 58, who used the decomposer on 40 acres of his farm. This year marked the first time in four decades he has not burned the stubble.
The bio-enzyme breaks down crop residue in about three weeks on average and increases organic carbon in the soil. On some farms, crops disintegrated even faster, within about a week, an encouraging sign as more farmers use the decomposer, Sawhney said.
Political will to find a solution has dragged, largely because farmers lacked a cost-effective alternative. Technologies like the Happy Seeder, a machine that sows seeds while simultaneously removing straw and depositing it over the fields as mulch, are too cumbersome and expensive. There are also plants that use the straw to make ethanol, but there’s not enough capacity currently.
So far, farmers say, the decomposer is a promising breakthrough.
Satinder Sharma, 62, who harvests wheat in Haryana, expects his yield to improve by 10 per cent this year. He spends less now on fertilisers such as urea and diammonium phosphate, a boost to his earnings. A bonus, he said, is doing his part to ensure clean air for the next generation.
The decomposer will “save the soil and plants next to the fields and the produce will be better for health,” he said. “It was a curse of nature to burn the crops and we were contributing to that.”
Source: DeccanHerald