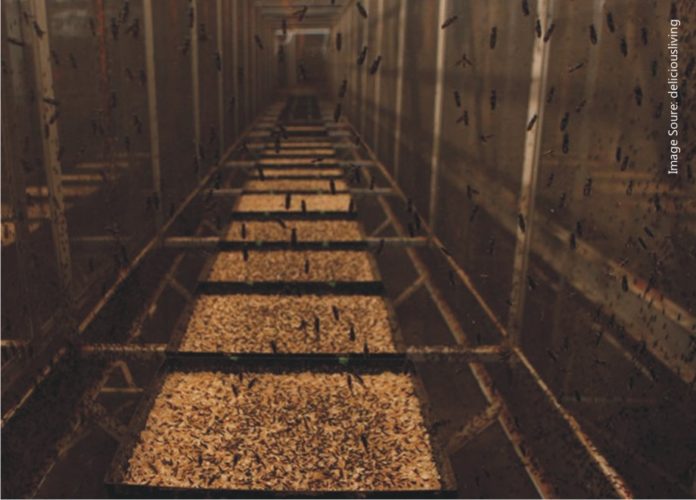 Enterra Feed Corporation has received new approvals to sell its insect-based feed ingredients in the United States, Canada and the European Union.
The Association of American Feed Control Officials (AAFCO) in the United States has agreed to Enterra’s request to include Black Soldier Fly Larvae Meal in feed for salmonids, which includes salmon, trout and arctic char, in their list of authorized feed ingredients. The supporting material and the change in the definition was reviewed and supported by the Food and Drug Administration (FDA).
“This is the first time an insect meal product has been approved in North America for the aquaculture industry and we’re excited to be the first to market,” said Andrew Vickerson, Chief Technology Officer at Enterra. The company’s first product, Enterra Whole Dried Larvae, was approved by AAFCO in 2016.
The company manufactures and markets feed ingredients derived from the larvae of the black soldier fly, a beneficial insect species that can be found naturally in tropical and temperate regions around the world. The larvae are reared under controlled conditions on locally sourced, pre-consumer food waste containing valuable nutrients that would otherwise be lost in landfill, compost or waste-to-energy facilities.
Instead, the insect larvae consume and convert the waste nutrients into usable protein, fat and energy. The larvae are then dried to produce Whole Dried Larvae, or defatted to produce Meal, a powdered protein ingredient similar in profile to fishmeal but with much less impact on the environment.
Fishmeal is a common ingredient in salmonid feed due its nutritional profile and digestibility, but the production of fishmeal, which is primarily made from wild caught marine fish, has depleted fish stocks in the world’s oceans. Sustainable alternatives are in high demand from feed manufacturers around the globe as the market for salmon continues to grow.
New Canadian approval for insects in tilapia and poultry feed
The company also received approval from the Canadian Food Inspection Agency (CFIA) to sell the dried larvae in Canada as a feed ingredient for tilapia and poultry, including chickens, ducks, geese and turkey. This builds on previous approvals for the same product in salmonid feed in 2017 and broiler chicken feed in 2016.
Approval to export insect ingredients to EU
The company is now registered in the EU Trade Control and Expert System (TRACES), which allows the company to export its insect feed ingredients to all member countries of the European Union. New EU regulations came into effect on July 1, 2017 to permit the use of insect ingredients in aquaculture feed. Approvals for poultry and pig feed are expected to follow.
Rapid production expansion to meet growing demand
With production at its Langley facility at maximum capacity, the company is planning to expand to a second, larger facility near Calgary, Alberta, Canada in Q4 2018. The company is also developing additional facilities in the coming years to keep up with demand for its sustainable feed ingredients.
Since opening its first commercial facility in 2014, Enterra has converted tens of thousands of metric tonnes of pre-consumer food waste into sustainable feed ingredients for its growing customer base.