The 3rd edition of Feed Tech Expo, India’s only feed exposition, was inaugurated by honourable Animal Husbandry Minister, Maharashtra, Shri Mahadev Jankar on Feb. 8, in presence of Animal Husbandry Commissioner of Maharashtra and the galaxy of Indian feed industry stalwarts. The 3-day event was organized on 08-09-10 Feb. at Pune.
More than 3700 poultry, dairy and aqua feed industry leaders from all across the country attended the annual event held at Pune. FTE-18, only feed event of its kind in India, attracted 81 participants to the trade show floor. Exhibitor demonstrated the latest innovation in equipment, supplies and services used in feed industry.
During the inaugural session, focus was given on industry challenges & its expectations, and rather it was a poser given to the government authorities. Raghavan Sampathkumar, Executive Director-CLFMA of India enlightened the audience about the transformational phase of the industry and the need for the longsighted view to create credibility in the industry, so as to attract youth to the Agri-business industry.
Poultry breeders’ welfare association of Maharashtra-a body that promotes chicken and egg consumption also supported the feed event and feed conference. C. Vasanthkumar, President of the association said that the industry seeks the government support to create infrastructure, in order to get the raw material at reasonable prices.
CONFERENCE ON ROADMAP FOR INDIAN FEED INDUSTRY
With the support and guidance of the Expert panel, feed conference on the theme “ Roadmap for Indian Feed Industry” was organized on Feb. 9 which was attended by a large number of entrepreneurs representing Indian feed industry.
In the inaugural address, Dr. T.K. Walli, the Chairman of the conference gave the overview of the India Feed Industry and various measures for the further development of the industry, with an emphasis on the production of quality feed.
O. P. Singh, Huvepharma, a renowned personality in Indian poultry industry gave the keynote speech in which he highlighted that vertical integration and R&D is the way forward for feed industry. 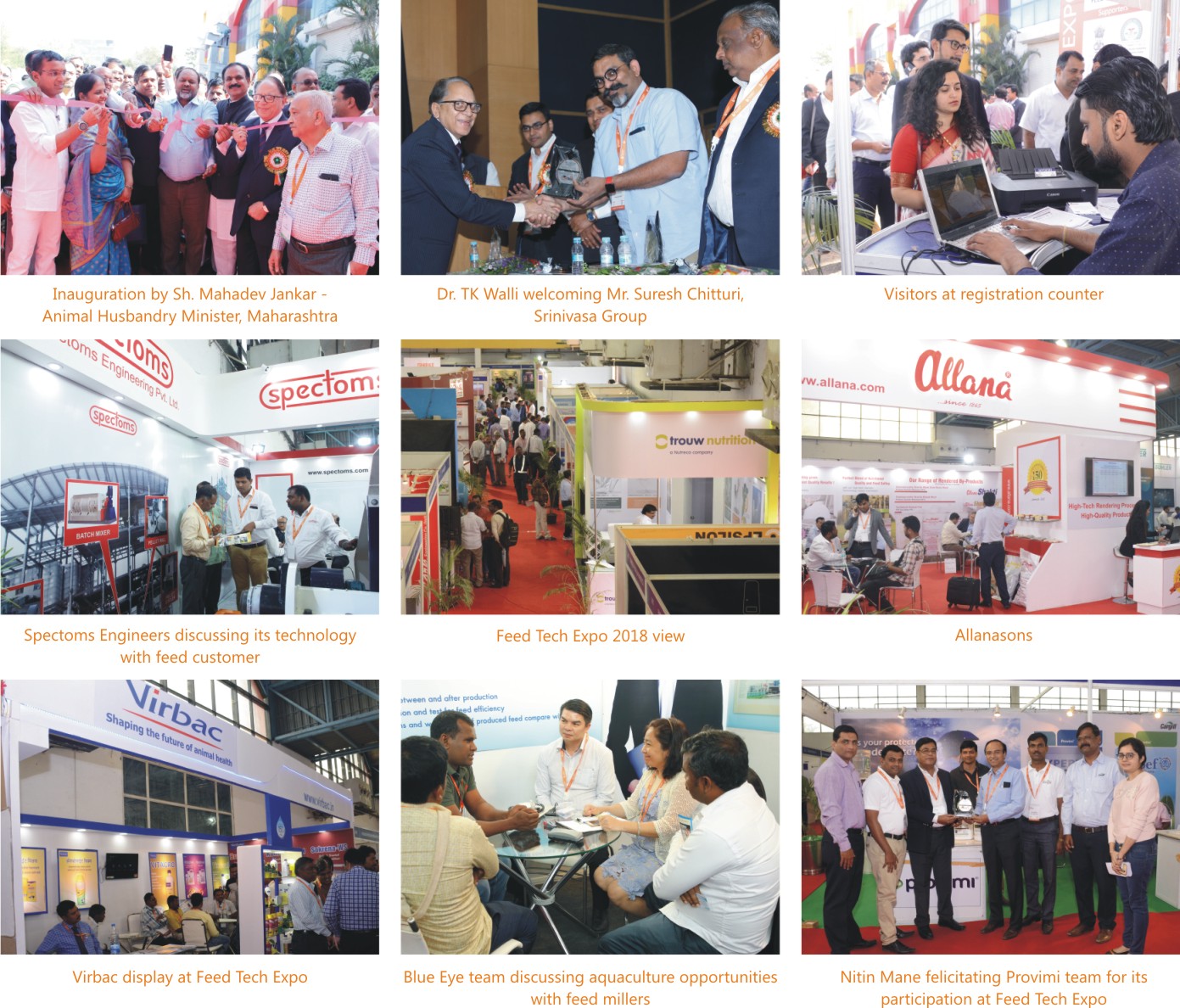 OPPORTUNITIES IN ANIMAL FEED INDUSTRY
Dr. Aman Sayed, Alltech presented the growth opportunities in world feed market viz-a-viz Indian feed market to the feed audience. “The global feed industry produced 1.07 Billion MT of feed & registered a growth of 2.57% this year compared to the last year. Previous 5 year data showed a growth of feed industry in Africa at 29% while that of Asia-Pacific at 7%. The reason for this lower percentage for Asia is China, which contributes to 50% feed production in Asia-Pacific, has not shown any growth for the last 2 years. So, the present growth rate is largely contributed by India, Thailand and Vietnam,” Dr. Sayed said.
The presentation figures stated India as the 6th largest feed producer in the world with 34.2 MT production. The country holds number 2 position in dairy feed and number 3 in fish feed, whereas it holds number 1 position in world dairy market and number 2 position in world aqua market. On the basis of these figures, Dr. Sayed predicted good growth opportunities for Indian feed industry.
The availability and pricing of feed raw material was presented by Prerna Desai, Edelweiss Agri Services and Credit. “The impact of GST implementation & demonetisation pushed the unorganized stockists out of business that also resulted in liquidity in the market and lower prices, which can be further pressurised by high yield Rabi crop,” she said.

The speaker had a viewpoint that pricing has to further go down to be at export competitive level so that the stock can be moved out. The balance sheet of almost all feed raw material looked comfortable and the trading future of Indian commodities would depend upon Argentina’s production.
Changes in the regulatory environment was addressed by Vijay Sardana, an agri economist who is well versed with government regulations .The speaker further observed that protectionism is the strategy of many countries across the globe so is true for India. The recent increase in the custom duty of all agro commodities supports the fact.