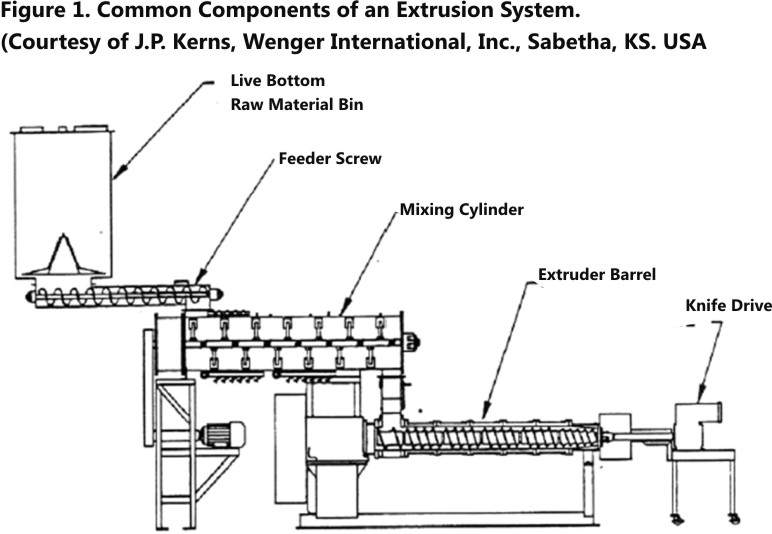 These machines are very simple in design, are constructed of cast, rather than machined, components and perform a specific function reasonably well. In this instance, the application is in the production of full-fat soybean meal. Most of these machines use a simple, interrupted flight arrangement with breaker bolts to create the shear and pressure necessary to heat-denature the anti nutritional factors associated with the use of soybeans in non-ruminant feeds. A manual variable orifice die is used that can be set close to or away from the end of the screw to increase or decrease operating pressure and process temperature.
While these machine designs usually produce acceptable FFS, they often fail when used to produce other extruded products, such as floating aquafeeds or pet foods, without significant mechanical and system modification. In most cases, a preconditioner is not needed when processing FFS, however, when attempting to produce pet- or aquafeeds, a preconditioner is necessary to precook and hydrate the starch and protein in the formula for successful production. Because of the relative poor fit (tolerance) between the screw sections and the barrel, much higher back flow tends to occur and production efficiency, product quality and nutrient survival tend to be low. However, there is no doubt that low cost extrusion equipment has a place in the feed industry and provides a feasible way to produce products that otherwise would not be cost effective.
Summary
Extrusion has become a common process in the feed industry and allows the production of feed types that simply are not possible with pelleting or any other available process. In general, single screw extruders provide adequate operating ranges and are more economical to operate than twin-screw extruders. With the availability of low cost extrusion equipment, processing of oilseeds such as soybeans is feasible. There is no doubt that the application of extrusion to the development of new and novel feed products will continue and will result in increased usage of the technology in the future of the feed industry.
Source: Kansas State University