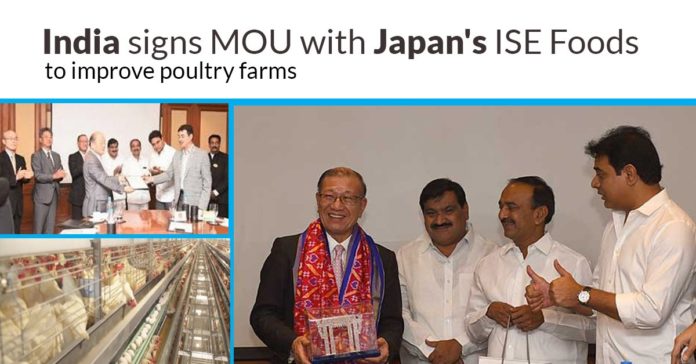 Waste management and disease diagnosis in addition to egg quality have been the areas requiring intent attention in poultry sector of India. Considering the need of the hour, India has signed a Memorandum of Understanding with ISE Foods (Japan’s largest egg producer) in order to address the evident scope of improvement. A few of the contributing factors as to why India is collaborating with ISE is that ISE’s egg production process, almost fully automated, is considered most hygienic in the world. The farm chickens are antibiotic free and the transit time of eggs from the farm to the factories is within 24 hours.
ISE Foods will commence its operations in India with two poultry farms initially. A unit with a production capacity of 1.2 million strong-chicken farm eggs will be set up in Telangana’s Siddipet, and a smaller one will be established in Gujarat’s Surat city. Looking at ISE’s Global repute and figures, ISE’s chickens lay about 20 million eggs a day and their business has been around for over 100 years with major operations in the US, China and ASEAN countries.
In a matter of some time, ISE Foods intends to introduce its protein-packed offerings to India’s promising markets.
One of the many unique aspects about ISE is the utilisation of eco-friendly system against odour measurement by using “deodorant”, “chip wood”, and “sulphur”.
The major aspect of Quality Control is “ISE integration System” that manages the egg collection, packing, production of feed, poultry farming and delivery production.
With so many feathers to its cap, ISE foods has surely got a lot to offer to Indian poultry sector.
Source: Business Standard