Feed is a mix of whole or processed grains & concentrates for all species of animals, which is now commercially produced for livestock, poultry, and fish industries. Corn is the major ingredient in poultry feed whereas soybean meal is for cattle feed. The price variation in feed grain, makes grain storage an important part of economical production.
Various factors like demand, quality and price fluctuation (of approx. 30% between summer and winter crop), require the feed producers to store feed grains for a period of 3-8 months, especially in India. The corn availability in India usually is with high moisture which needs to be dried to approx. 13% M.C. by electrical, bio fuel or even by sun drying for safe storage in silos.
Corn behavior in storage bins
Grains are hygroscopic in nature, it gain or lose moisture, when the vapor pressure of water in the space surrounding the grain is greater or lesser than the vapor pressure exerted by the moisture within the grain. (Ref. Hogan and Karon, 1955)
In simple terms, corn respires and hence releases heat & moisture while respiration. Typical storage conditions in a humid & hot tropical country can have ambient temperatures in the range of 30-40 Deg C while corn moisture content is 15%. These conditions may lead to heat generation of about 1MJ/T per day which can increase eventually. The heat generation causes drying losses in the grain. In addition to that, insect infestation is also a consequence of natural heat generation.
Dryers may not equalize variability; aeration by ambient air may develop moisture variation among kernels. Moisture variation results in shorter shelf life and bigger storage risk.
As the shelf life of the corn is temperature dependent, therefore, it is important to bring down the temperature to 10-18 Deg C as soon as possible. A delay of a month in the cooling process can substantially reduce the shelf life and hence the grain is more prone to future spoilage.
Molds in the grain are known to produce mycotoxins under specific unsafe conditions of temperature and humidity. An increase in CO2 can indicate unwanted biological activity that is caused by fungus, insects or other infestations in the grain.
Corn quality management
It is known that ambient temperature and relative humidity influence the corn activity in the silo. Cooling the grain by a grain chiller can simply put an end to drying loss, insects and molds. The cooling is applied on the basis of Sorption isotherms of corn. The chiller will produce a uniform temperature and relative humidity irrespective of the ambient conditions. The chiller by default, dehumidifies the cold air depending on the pre-set temperature..
The cooled air is distributed in the silo/flat storage through a duct system in the bottom of the silo/flat storage. As the cooled/conditioned air moves up through the grain mass, the temperature in the grain is reduced, eventually reaching the set value. Grain being an excellent insulator, once cooled to a low temperature, will remain cool for a substantial time period. Even at peak summer, the radiations will heat up the surface of the silo but grain close to the silo wall will act as an insulator.
Since corn is dried before storage, the final drying can be an expensive affair (reducing moisture content from 16% to 15%). Heat drying is also harsh to grain. By using grain chilling, partial drying is possible, through cold dehumidified air which is more economical and gentle to the grain. The advantage is the grain coming out of the dryer at a higher moisture content, and then 1-2% of moisture is lost in the cooling process. The drying effect varies with the moisture content of the grain. With more moisture, the drying effect is up to 2% and below 14% moisture content, drying effect is 0.2%.
The chart below illustrates chances of mold formation are highest at temperature above 25 Deg C & with grain moisture level of ~15%. If the ambient RH value is high, through aeration, the grain would get further moist and lead to infestation & mold formation. By cooling the grain, storing at even moisture level of 16% becomes risk free.
The grain chilled raw material corn will have the same harvest freshness and shape, eventually leading to improved milling performance. 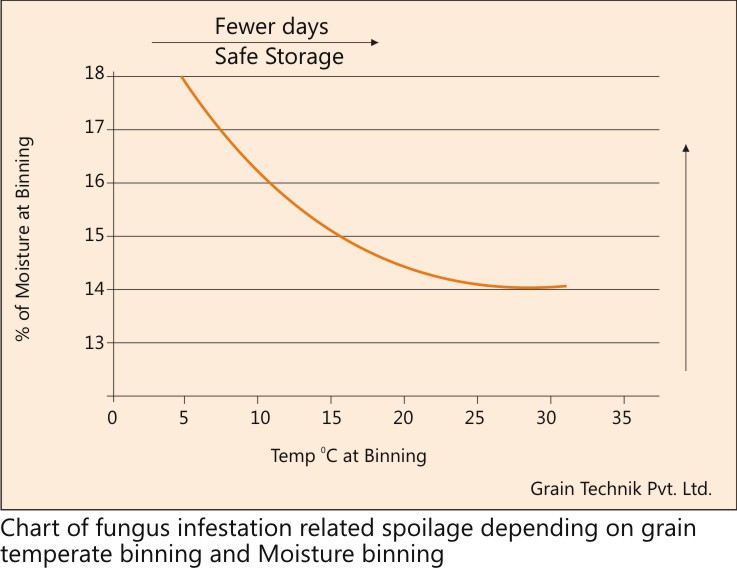 Grain chilling proves to be a strong value addition tool for the feed pellet. During pelletisation, the conventional cooling from the ambient air is not sufficient to achieve the complete cooling of the core pellet. This results in higher risk of stress cracks, making it prone to powdery surface. By preservation cooling, the pellets is cooled to the core and hardened. The end-product is easy to transport and ideal for bird and animal consumption.
Aeration in silos in tropical countries
Aeration uses ambient air which is not a solution. The ability of that air to reduce the heat is limited under tropical & desert conditions, where the ambient temperature is higher. Secondly, relative humidity is higher in tropical zone which leads in moisturizing the grain. The air is only able to take the excess heat from the grain which is above ambient temperature. Also, there is a risk of moisture migration in the grain silo which leads to mold formation. Therefore, the temperature of the bulk grain remains relative higher which results in high dry matter loss (weight loss) of carbohydrates and water accumulation in the grain mass.
Conclusions
Cooling the maize immediately (after harvest?) is the key for conserving the freshness and quantity. The corn shape is maintained till it is unloaded. By combination of drying and grain cooling, 30% of power cost can be saved. In case, a feed mill is just using a processing silo and not for storage, even then grain used within 2 months’ time also needs be cooled to avoid unhygienic perspective. There is no need of insulation for the silo if grain is chilled using grain chiller. It requires only 3 weeks of running of unit for archiving achieving the set temperature inside the silo. The cooled maize will remain cooler for longer duration which is also free from insects and molds. The feed producer need not to use any chemical/fumigation inside the silo bins. It is true the insects developed immunity towards fumigation and even fumigation can never be a success as the gas cannot penetrate into the entire silo. Whereas the grain chiller can cool the complete bulk in the silo bins. The end quality of the feed pellet is free from mycotoxins and fine finish (no stress cracks on the pellet). Therefore, cooling corn before processing and cooling feed pellet will give better out come in quality as well as quantity.
For further information about the technology, please contact
pari@graintechnik.com