Introduction:
Colibacillosis has put a major impact on poultry industry today in the country. It is characterized by air sacculitis, omphalitis, salpingoperitonitis (egg peritonitis), fibrinous pericarditis and Escherichia coli (E.coli) Peritonitis Syndrome (septicemia), also known as EPS. Coliform Salpingoperitonitis (SPS) is a chronic condition and results in normal mortality and its economic impact is limited. In contrast to SPS, EPS is a per acute disease characterized by mortality soaring up to 10-15%. Thus, distresses the economies of poultry production to a great extent. In order to prevent the losses caused by this disease, an overview of the disease and its prevention and control practices has been discussed in the article.
Etiology:
Escherichia coli is a normal inhabitant of bird’s lower gastrointestinal tract. It is also commonly present in the pharynx and trachea. Most of E.coli strains are safe, although some strains are virulent and able to induce diseases in birds. Those ones were named APEC, for Avian Pathogenic E.coli, with the intestine constituting their reservoir.
Pathogenesis:
As the pathogen is the normal inhabitant of the gut micro flora, but due to many predisposing factors the pathogen flourishes and leads to disease condition in poultry. Moreover, there are many routes of the agent to enter the host and flourish it.
Epidemiology:
The organism is a natural inhabitant of the gastrointestinal tract of animals and birds in a concentration of 105/g. Route of infection could be-

Avian colibacillosis was found to be widely prevalent in all chicken age groups (9.52 to 36.73%) with an especially high prevalence rate in adult layer birds (>50 weeks ) (Yuvraj Panth -2019)
Clinical signs and lesions:
In general, broilers >4 weeks of age are affected. Birds of any age can be affected if resistance is reduced by predisposing factors. Birds with colisepticemia can become lethargic and stop eating and drinking. Further the disease gets aggravated due to dehydration. Chronically affected birds show signs of stunted growth and unthriftiness. E.coli infections in poultry occur in two forms: systemic and localized.
Localized forms of colibacillosis:
Omphalitis / yolk sac infection- Contamination of hatchery and eggshell leads to omphalitis in young chicks and concurrent infection further moves to yolk sac causing yolk sacculitis (main cause of chick mortality. 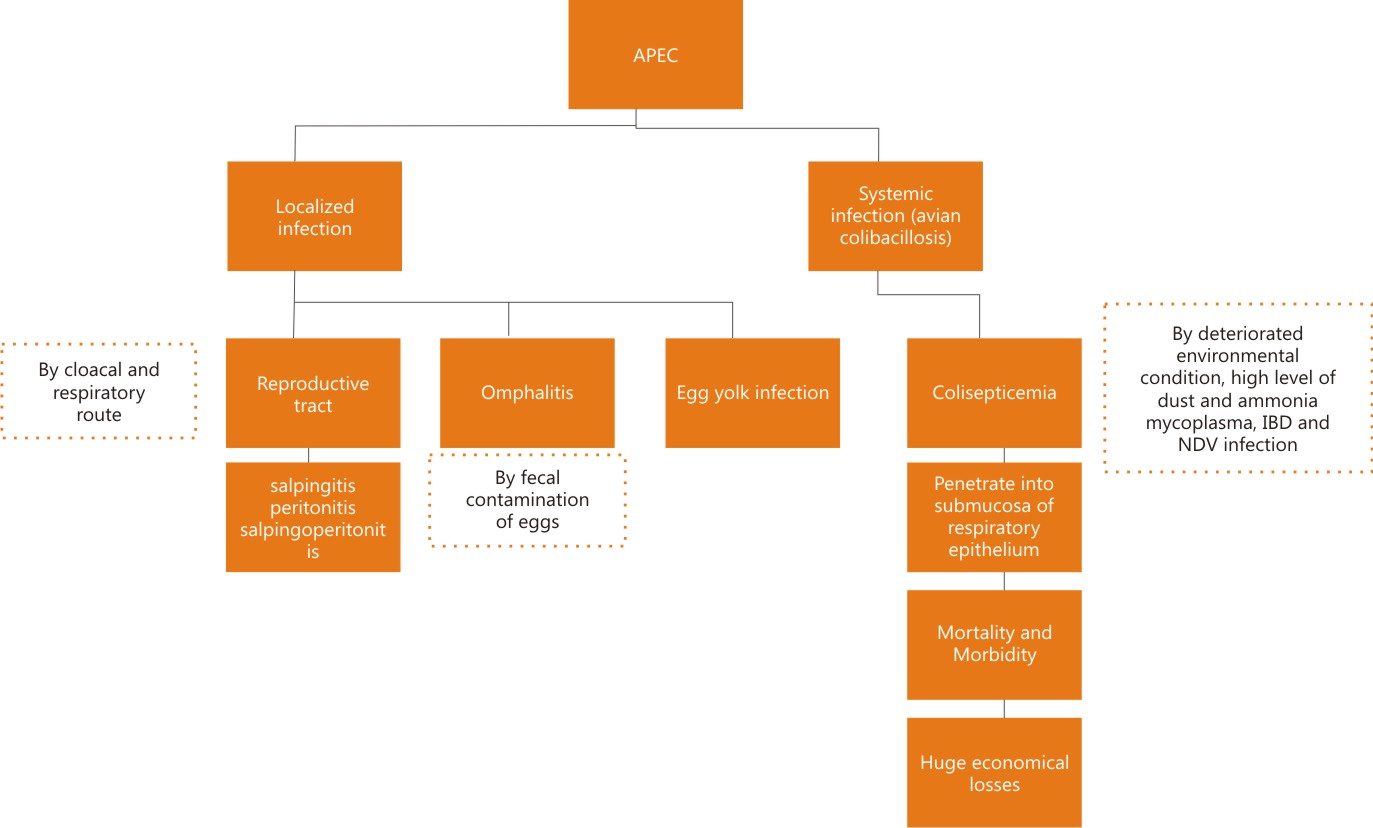 Swollen head syndrome- There is accumulation of exudate in head due to which head appears swollen. Coliform Cellulitis- (Inflammatory Process) Caseous exudates plaques in subcutaneous tissues are commonly located on the abdomen or between the thigh and midline. 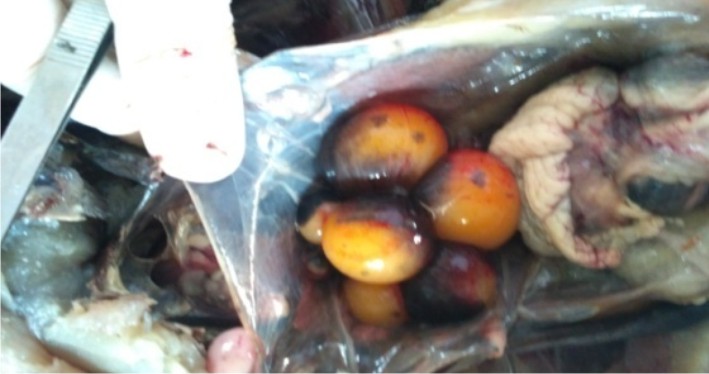 Salpingitis/ peritonitis/egg peritonitis- Oviduct inflammation (salpingitis) due to E.coli infection results in reduced egg production with the increase mortality of laying hens and breeders. Infections can spread to the peritoneum causing peritonitis. Oviducts are presented with a firm mass or masses of caseous exudate. Cloaca, infected air sacs, vent pecking and prolapse are responsible for infection. When E.coli spreads from the oviduct to the abdomen, salpingoperitonitis occurs. Egg peritonitis is the inflammation of the peritoneum caused by the presence of a broken egg in the abdominal cavity. Amorphous egg yolk in peritoneum is observed in the given figure.
Systemic forms of colibacillosis:
Colisepticemia-

Coligranuloma- (Hjarre’s disease) is a sporadic form of colibacillosis. Multiple granulomas occur in the liver, proventriculus, ventricle, small intestine, cecum and mesentery.
Diagnosis:
The diagnosis is based on the isolation and identification of the E.coli organism of the typical colibacillosis lesions.

Prevention and Control:
As pathogenesis of Colibacillosis is complex, therefore a more comprehensive approach is required to control the disease.

Conclusions:
Colibacillosis is a major cause of morbidity, mortality and economic loss for all types of poultry worldwide. Treatment of colibacillosis is problematic due to widespread antibiotic resistance among APEC. But proper preventive measures such as management and nutrition have a major share of this cake. So, it’s better to shift the focus towards control and investing on prevention rather than worrying about the cure.
References are available upon request.
by Pooja Rawal, G.B. Pant University of Agriculture and Technology, Pantnagar