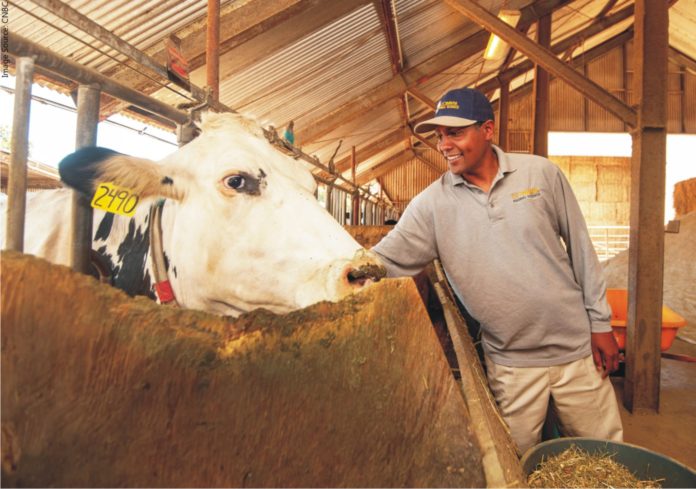 Seaweed may be the super food dairy cattle need to reduce the amount of methane they burp into the atmosphere. Early results from research at the University of California, Davis, indicate that just a touch of the ocean algae in cattle feed could dramatically cut greenhouse gas emissions from California’s 1.8 million dairy cows.
“This is a very surprising and promising development,” said animal science professor and Sesnon Endowed Chair Ermias Kebreab inside the UC Davis dairy barn where he is testing seaweed efficacy with 12 Holstein cows. “Results are not final, but so far we are seeing substantial emission reductions. This could help California’s dairy farmers meet new methane-emission standards and sustainably produce the dairy products we need to feed the world.”
Kebreab’s project is the first to test seaweed on live dairy cattle anywhere in the world. His team will publish preliminary findings in late June and begin further tests with additional cattle later this summer.
Methane Reduction
Testing supplements in cattle feed is not new. Kebreab and his colleagues at UC Davis and beyond are finding varying degrees of success with a wide range of feed additives. Some compounds work in the lab with simulated cattle digestive systems, but not with live animals.
During lab tests last year, researchers in Australia found that just 2 percent seaweed in cattle feed could reduce methane emissions by 99 percent. The seaweed apparently inhibits an enzyme that contributes to methane production.
“The molasses masks the smell,” Kebreab said. To test seaweed efficacy, Kebreab and animal nutrition graduate student Breanne Roque have separated 12 cows into three groups. Two groups are fed with different doses of seaweed, and one group’s feed has no seaweed at all. They rotate through the two-week feeding regimens with a week long seaweed fast in between.
Four times a day, cows get a snack from an open-air contraption that measures the methane in their breath as they eat the treat.
“The numbers we’re seeing are amazing — well beyond the target that farmers will need to reach,” Kebreab said.
Throughout the seaweed diet, the cows’ milk is tested for qualities like yield, flavor and nutritional content.
Among his many projects, Kebreab recently received a USD 500,000 grant to help improve sustainable livestock production in Ethiopia and Burkina Faso, where dairy cattle produce 5 to 10 liters of milk per day compared to the 45 liters that cows in California can produce. He is working with researchers and funding from the University of Florida with support from the Bill and Melinda Gates Foundation.
“By improving the quality and quantity of dairy production in developing countries, we help families rise from poverty and malnutrition, and also reduce the carbon footprint of cattle worldwide,” Kebreab said.
If seaweed proves to be a climate-smart supplement, producing it could be environmentally friendly, too. As Kebreab notes, “Growing seaweed doesn’t require land, fresh water or fertilizer.”
But there is still a lot to learn before farmers should consider feeding cattle seaweed.
“We have much more research to do to determine if seaweed supplements could provide a viable, long-term solution,” Kebreab said. “But we are very encouraged by these early results.”
Source: University of California