The Poultry feed accounts for nearly 60 per cent of the total feed marketed in India. The feed composition generally comprises of grains, grain by-products, oilseed meals, animal protein sources, including vitamins, minerals and various feed additives. Grains like maize, wheat, sorghum, bajra, ragi and broken rice and grain by-products like rice polish, de-oiled rice bran and maize gluten meal are used in poultry feed. In addition to oilseed meals such as soybean meal, mustard meal, groundnut meal, cotton seed cake and sunflower meal, and animal protein sources like fish meal, whole fish, meat and bone meal, poultry-by-product meal are used as well. Out of these raw materials, maize and soybean meal have largest usage in the poultry feed rations.
In last 4-5 years, India’s poultry feed’s share has been fluctuating between 45 and 50 per cent of the total demand for maize in the country. It may be noted that the poultry industry is heavily dependent on maize, as it provides around 50-55 per cent of the input required for broiler feed and roughly 25-30 per cent of the input required for layer feed. Maize is a preferred source of energy in poultry feed, compared to other substitutes, mainly because of its availability, higher energy and price economics makes. The per hectare yield of the crop has improved more than three times, from 1.9 metric tonne/hectare in 2004-05 to 5-7 metric tonne /hectare in 2016-17.
Domestic feed consumption in India has grown at 2 per cent annually over the last ten years from 19 MMT in 2004-05 to 24 MMT in 2016-17. However, the situation was different in 2009-2010 when the domestic consumption dropped because of lower production, on account of a severe drought in the country. In the global protein meal market, soymeal continues ruling the roost. The global soy meal consumption in 2016/17 as estimated by an USDA survey report stood at 225. 07 MMT, which was roughly 47.4 MMT greater than four years back i.e. in 2012/13, when the consumption was assessed at 177.7 MMT approximately. This would translate into a noticeable increase of 27% (figure rounded off) in just four years. The government currently projects 2016-2017 production of soybean at 14.2 MMT. 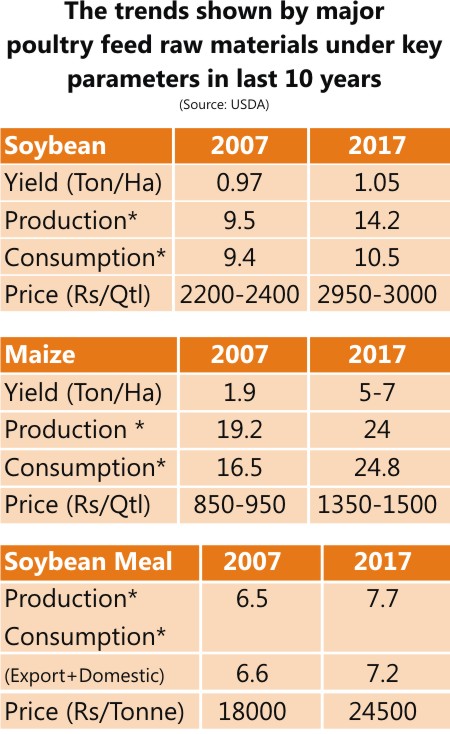 The USDA has reported average production of soy meal for 16 years at approximately 5.50 MMT and during this period the production has varied between 2.70 and 7.7 MMT. With higher incomes and health awareness, the India population is shifting towards non-vegetarian diet culture that indicates the consumption of poultry and poultry products will continue to rise in years to come.
It is a known fact that the poultry feed industry has been growing at a steady rate of 6-8% for the last few years while cattle feed consumption has seen growth of 4%.
Looking at the present scenario and growth predictions of the industry, it is high time that the government should take required steps to improve production to ensure steady supply of the key raw materials like maize and soybean at a reasonable price.
* Production and Consumption in MMT
Soymeal consumption in India has expanded significantly by 400-500 percent in the last 16 years but during the same time period, production of soybean & soy meal production has grown only by 65-120 and 35-100 percent respectively. This conclusion has been derived from the figures reported in the USDA supply-demand release.
India is the third largest producer of eggs, just ranking behind China and USA and 4th largest chicken producer after China, Brazil and USA. Eggs and chicken available at the reasonable prices are accepted by all communities. Egg production in the country has gone up to 70-71 billion from few millions in a span of approximately 25 years. In the same period the broiler production has reached ~4 million tonne. As the market size has grown significantly which implies that there should be constant efforts from the government, and policy makers in improving production of these feed ingredients especially maize, wheat and oilseed meals like soymeal/canola meal.
Last 3 years of better monsoon in Central and Western India has resulted in better soybean production. The country is currently in a comfortable supply situation for providing soybean meal to the domestic poultry industry and also to the export markets.
However, concerns are emerging for maize or corn because poor spatial distribution of rains in 2016 has adversely affected country’s production for a third year in a row. Adding to the worries is the projection of demand to balance the supplies comfortably (refer table 2). The southern peninsula which is a major producer of corn, experienced a dry spell during July and August ultimately bearing a negative impact over maize production in Karnataka, Telengana and Tamil Nadu.
In order to address to the maize supply problem, the government should continue providing price support mechanism to encourage farmers to grow maize. Secondly, there is need to enhance the groundwater tables wherever maize cultivation is promoted in place of paddy, since this crop requires only 20 percent of the total water needed to cultivate paddy crop. Another benefit over paddy is that the maize crop gives relatively better returns to the farmers.

Mycotoxins: A Threat to Cattle Feed Safety in Indian Dairy

Insect Meal as an Alternative Protein Source for Poultry