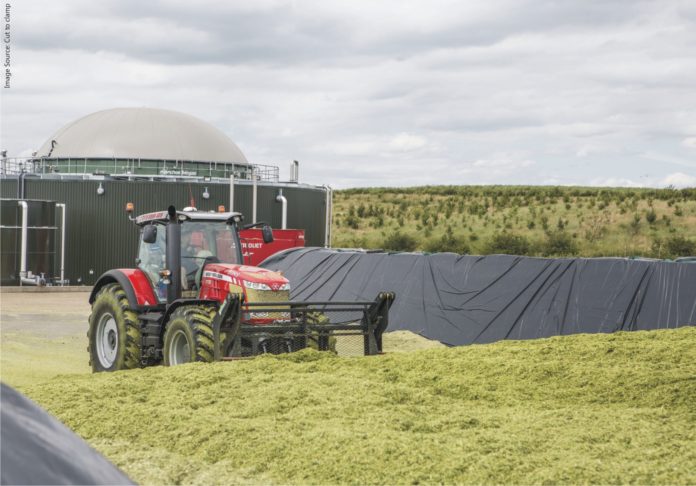 Maize silage is often used in dairy cow feeding and represents 50% or more of the total content in Total Mixed Ration (TMR) in Europe, North America, Australia and Asia. Maize or corn is a very versatile plant with high growth rate, resistant and one of the most high-yielding forage crops (Roth et al., 2001). Globally, maize is a leading cereal grown – in EU-28 maize was grown on 14.7 million hectares and maize silage acreage was 5.9 million hectares. In India, maize is the third largest crop after wheat and rice. It is being used for human consumption, fodder, and industrial applications like starch, oil, beverages, sweeteners, pharmaceutical applications, cosmetics, gums, packaging and paper industry. Because of high palatability, sufficient starch level, digestible NDF and protein, corn silage is the most valuable forage for ruminant livestock. Nevertheless, in order to obtain a very high-quality corn silage, few critical points have to be considered.

Harvesting: Harvesting time is essential in order to achieve not only the best nutritional value, but also to reduce mould contamination risk on the field. 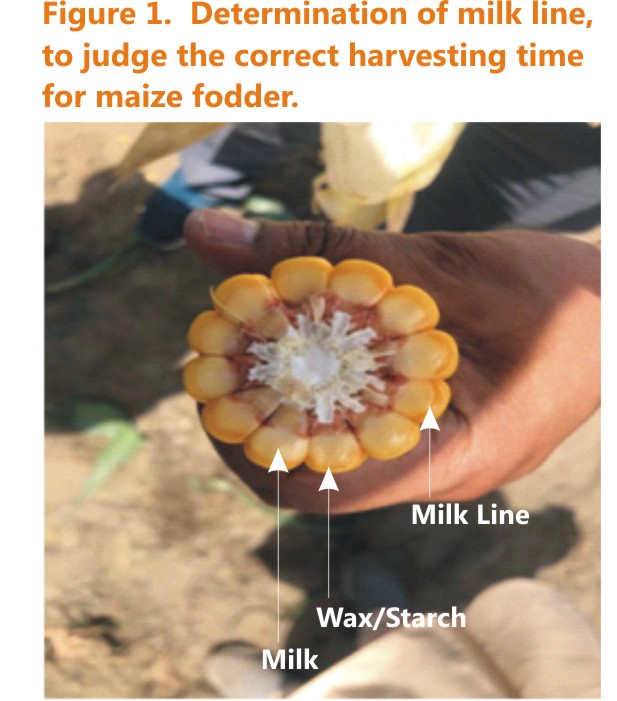 Milk line Wax/Starch Milk
Compression:
It is the most important point at ensiling, because it:
i) Minimizes aerobic activity
ii) Maximizes anaerobic activity 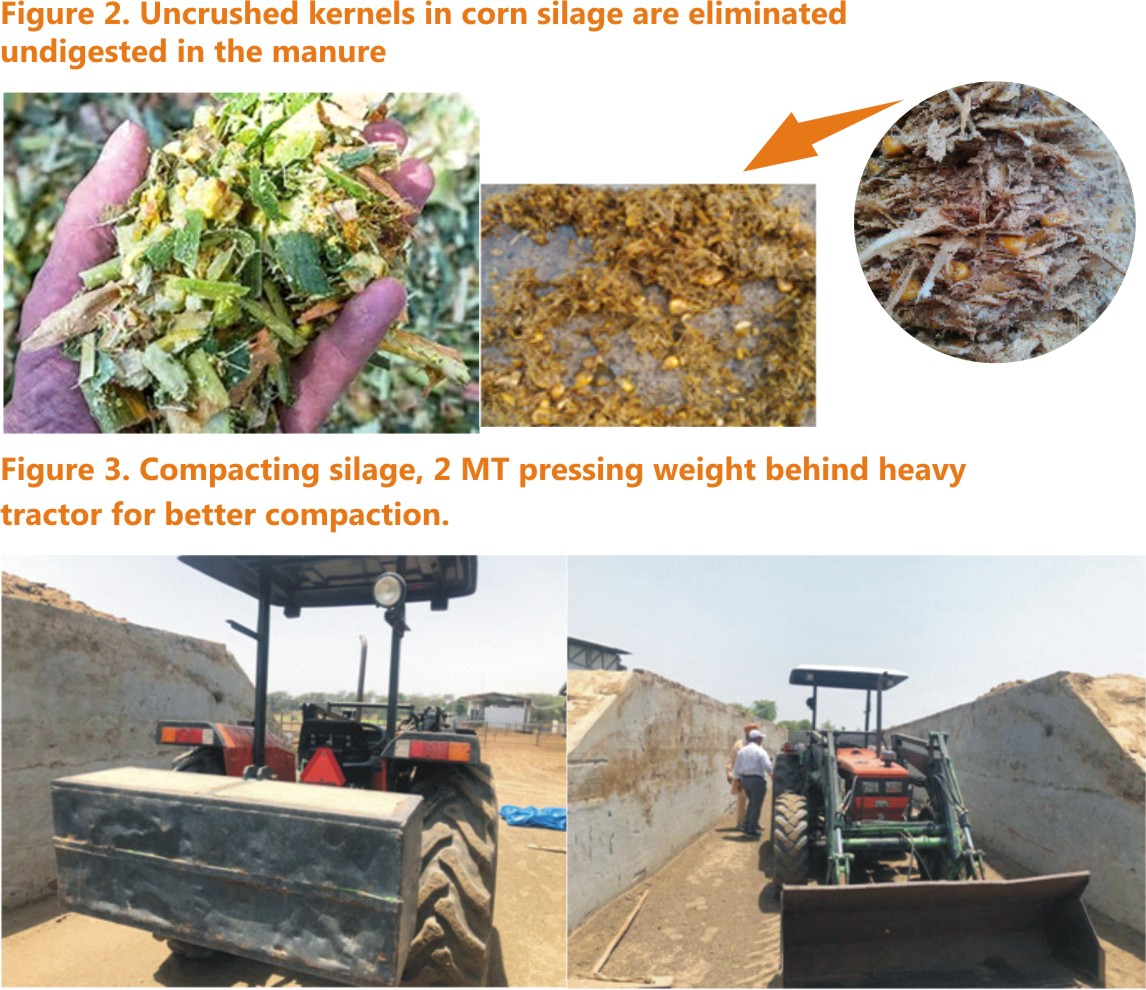 Preparation of Silage Pit and its Sealing: After Oxygen has been removed from silage it is very important to keep the air outside, so it is recommendable to use two plastic folia: 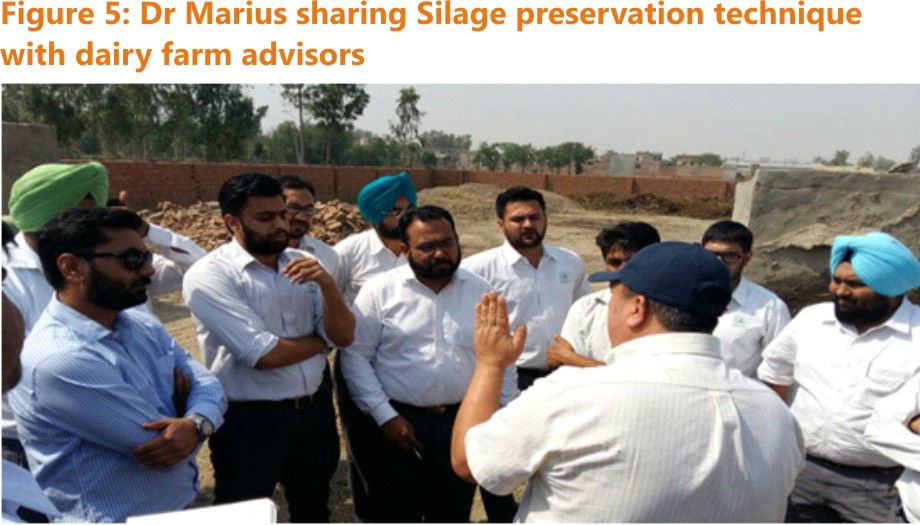 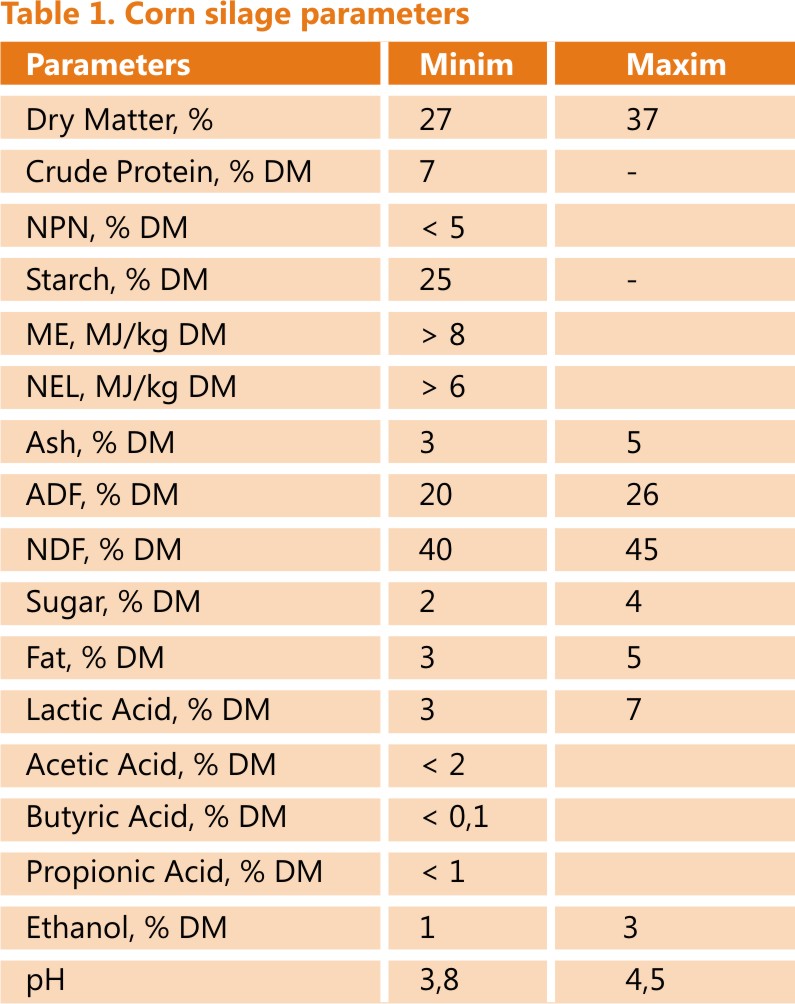 A low pH indicates that the silage is stable and moulds cannot further develop. High pH, over 4.5 can be a result of a dry silage (over 50% dry matter), Clostridia fermentation, extreme mould contamination, or high level of ammonia.
Lactic acid is an important organic acid for good silage because it is a strong acid, with low dissociation constant (pKa=3.86). High level of lactic acid means that good fermentation occurred and the silage is stable, while low lactic acid content is a result of high dry matter content or Clostridia fermentation. Lactic acid is the most efficient preservative of corn silage.
Regardless of what additives we are using (e.g. silage inoculants or mixture of organic acids), the outcome is the same: pH starts to drop, lactic acid bacteria prevail as pH decreases, so at the end of the day lactic acid becomes the most prevalent acid in the silage pit. Experts recommend a mixture of organic acids containing Lactic acid, Sorbic acid, Propionic acid and its stable salts exactly for this reason. High levels of acetic acid can be encountered in very wet silages (below 25% dry matter), in silages that were slow compressed or bad covered or in silages treated with ammonia, which raises pH and this can lead to dry matter intake limitations. High level of butyric acid, over 0.5% in dry matter shows that Clostridia fermentation has undergone. This situation might occur when soil is mixed with crop during harvest.
Silage with high butyric acid level will have low nutritive value and high ADF and NDF. Usually, propionic acid concentration in corn silage is less the 1%, but when dry matter is around 35-40%, this organic acid is almost undetectable. Because propionic acid is a good silage stababilizer and energy source, a low propionic acid silage can be treated with Propionic acid or its salt based organic acid additives or biological additives such as silage inoculants. Inoculants can be used following its specific composition, environmental and climatic condition and inoculant’s specificity of the crop and manufacturers storage and usage specifications.
Under conditions when extremely wet or dry silages are prepared, or when compressing is poor and when silage pit coverage is improper, the yeast or mould activity restarts and second fermentation of silage occurs. Visible indications of such asilage damage are high pH, increasing silage mass temperature, high ethanol level, high butyric acid level, odour and colour modifications. Usually silage becomes yellowish because of Maillard reaction, but also can have dark brown, black or red spots because mould activity and bad, acidic odour can be detected. Though there are different opinions for the usage of the silage additives for effective preservation of silage, few important aspects needs to be taken under Consideration:
Dry matter content and crop type: Many inoculants are crop specific and require effective storage specification, from refrigeration to cool and dry storage specifications. Choice of bacterial strain and its adaptability in specific crop should be considered
Climatic condition at the time of ensiling: As in tropical climate temperature remains high, it is important to choose additive considering the hot and humid condition. It is important to bring pH down to 4-5 to prevent hot fermentation and provide anaerobic condition to ensiled material.
Wet Silage: When harvested under high moisture condition or rainy season, needs adequate precaution, as it is prone to low aerobic stability and less compaction.
Dilution of silage:  Additive needs to be such that it leads to high Aw activity in ensiled material, resulting in water pockets in ensiled material.
Conventional methods: like incorporation of salt, urea, molasses needs to be reviewed by silage experts, as it is quite specific to the ensiled material with clear objective of the preservation requirements. Incorporation of high amount of Salt and Ammonia, may not allow pH to drop down to desirable level and as Molasses quality varies a lot, it may not be fit for silage.
Addition of enzymes: as silage preservative is usually targeted towards mobilization of sugar content from starch, but needs to be evaluated, on the basis of its requirement and its choice as per the crop type.
Aerobic fermentation inhibitors (FI): like Selko TMR, under hot and humid climate works well provided its incorporation and composition fills in the requirement of silage preservation. FI, with blend of organic acid, rich in lactic acid, propionic acid, sorbic acid and propionate salts helps in reducing pH quickly, control water activity in ensiled material and aerobic stability of the fodder kept under preservation, without specificity of the Crop type.
It is advised that use of silage additives can improve shelf life of the silage in bunkers and bales. Main emphasis needs to be given on the quality of silage manufacturing which includes all management aspects starting from – sowing in the right season, harvesting at the right DM, proper wilting and filling in the Bunkers and Bales, right pressing and compaction, proper packing and face management while opening for feeding. Use of Silage additives does not ensure better preservation quality if silage making management is poor. One of the most common reasons of second fermentation is silage face management since exposure to air is huge and constant in this area (figure 6). 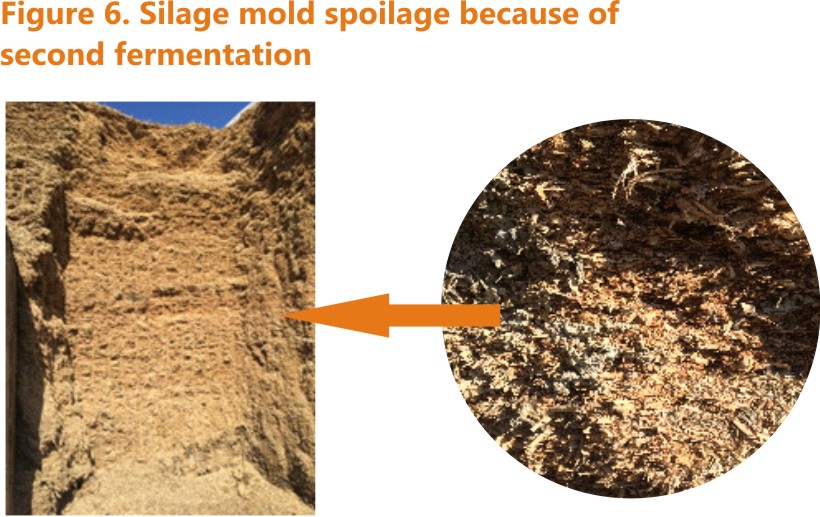 In order to avoid mould in the silage, there are few actions that have to be taken, both before and after ensiling.
Before ensiling:

It is therefore very important to produce a high-quality silage, because a bad maize silage represents a limiting factor for dry matter intake. However, even if moulds are not spoiling organoleptic characteristics of the TMR, the insidious mycotoxins will impede cow metabolism or, worst; will be consumed by people via animal products.
References available on request.
For further details, please contact the authors at customercareindia@trouwnutrition.com
by Dr Marius Bogdan and Dr Suyash Vardhan – Trouw Nutrition