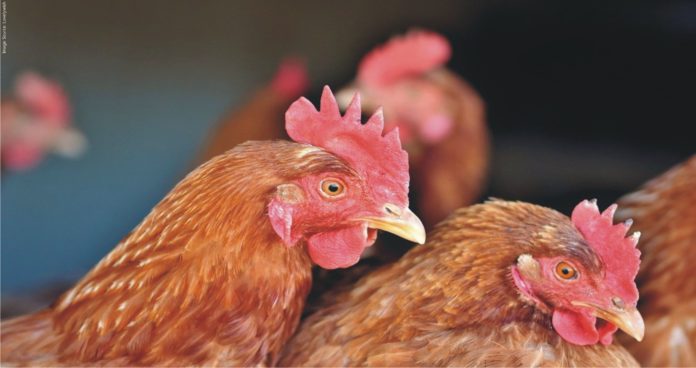 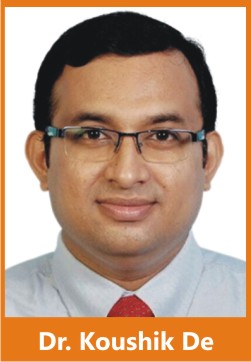 An organic mineral is a combination of a metal ion with an organic molecule called ‘ligand’ such as amino acids, proteins, polysaccharides, yeast, or organic acids. Specifically, the metal ion is bound to the organic ligand through multiple attachments (either ionic or covalent) with the metal ion occupying a central position in the structure (Kincaid, 1989, Nelson, 1988).
Animal Trace Mineral Requirements aren’t Static:
Poultry feeds must be formulated to provide all the necessary animal’s mineral nutrient requirements if optimum growth and production is to be achieved. The exact minimum dietary requirement of trace minerals for every animal is though not a given, constant value as it depends on various influencing factors such as genetic developments, age, reproductive state and health of the animals, housing system and management of the farm. Still today, official recommendations of requirements by official Research or Animal Nutrition organizations such as the National Research Council (NRC), CVB (Centraal Veevoeder Bureau) or genetic breeding companies remain under discussion. Some were defined in the 1990s and it can be questioned if they are therefore adapted to modern breeding systems/breeds and production.
To determine the correct inclusion rates for animal feeds to achieve optimum production results, it is vital to consider some factors that influence the needs of the animals. Broilers now havedifferent carcass characteristics andare grown to increasingly large sizes,so a healthy and stable skeletalstructure becomes even moreimportant. The increased egg outputof modern layer strains means thategg shell quality has become morecritical as hens are laying at an earlierage with corresponding reductions inboth mature body weight and dailyfeed intake.
More is less –interactions and antagonisms:
Due to the simplicity of their molecular structure, trace minerals within inorganic sources are very susceptible to binding with other feed ingredients such as other minerals or more complex molecules like phytate, making them no longer useful for your animals (Fig.1). This results in less mineral supply to effectively support the animal performance. In addition, phytic acid is able to form complexes with trace minerals that are very stable and highly insoluble, rendering the minerals unavailable for absorption. High concentrations of calcium increase the phytic acidmediated antagonism on trace mineral bioavailability. The macro minerals calcium and phosphorus are antagonistic. Calcium suppresses zinc and manganese availability, while phosphorous is antagonistic with zinc. 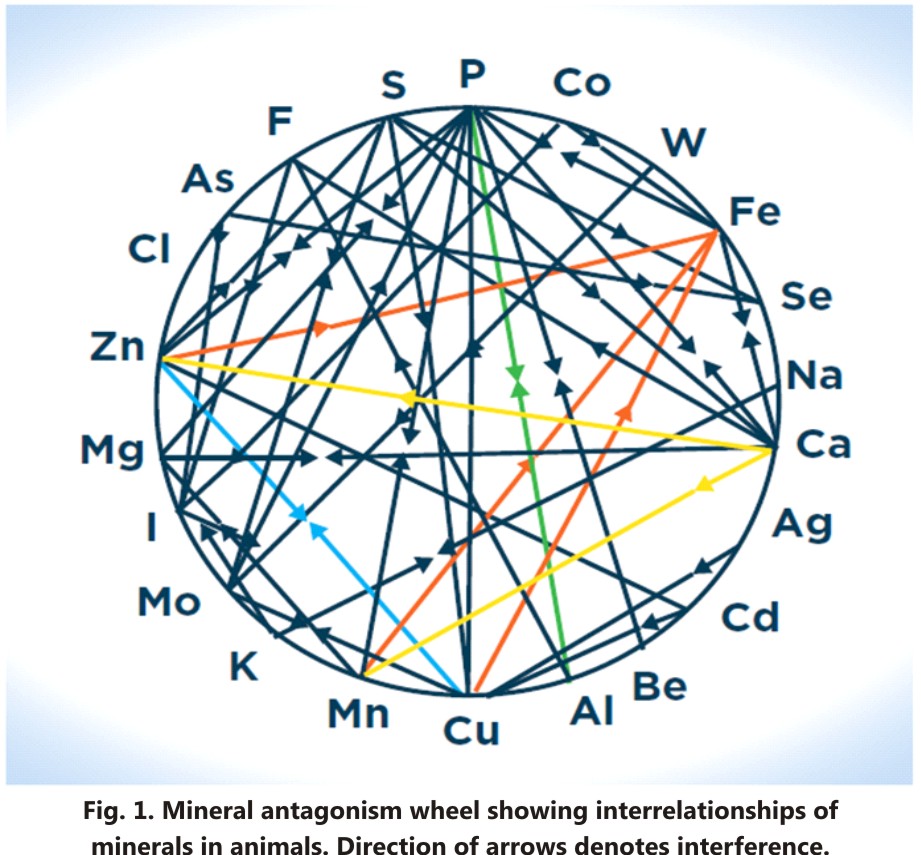 Unfortunately, many of the NRC trace mineral requirement values are based on research from the 1960’s and 1970’s and many nutritionists believe these recommendations are inadequate to support the needs of modern poultry strains and also as a cheap ‘insurance’ against poor performance and due to concerns with the consistency of quality of ITMs. One of the paradoxes of this practice is that dietary antagonisms can actually be increased, so more can actually be less and environmental depositions of trace minerals are also increased.
ITMs tend to dissociate in the low pH environment of the upper gastrointestinal tract of the bird. When the dissociated trace mineral reaches the more neutral pH of the small intestine, it is susceptible to various nutrient and ingredient antagonisms that impair absorption and thus reduce the bioavailability.
Not All Organic Trace Minerals (OTM) are same:
The differences between various organic minerals are based on mainly the type of the ligand or organic molecule that attach with the metal and the type of bond between the ligand and the mineral. 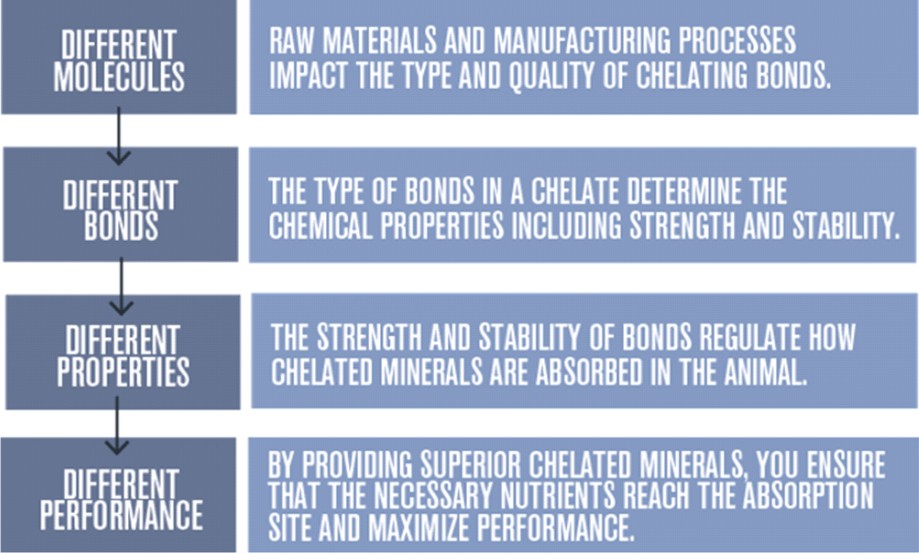 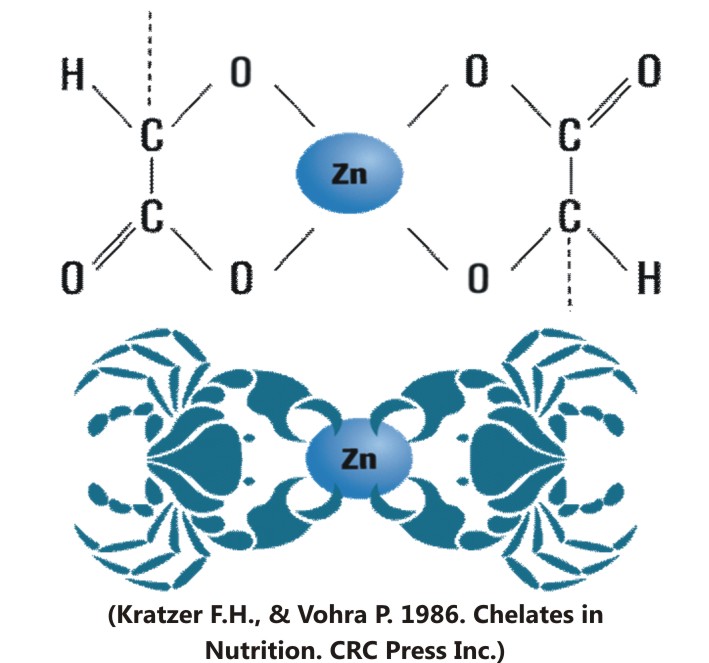 Understanding Chelation:
The word Chelation arrived from the Greek word “Chela” which means “Pincer”. When a ligand connects to a metal atom at 2+ points, it forms a chelate.To form a stable chelate, multiple ligands need to connect to the metal. If only one ligand connects to the metal, it is technically a “metal complex” rather than a “chelate” when two five member rings connect to the metal with two points of contact it forms the most stable complex found in nature.

Bis-Chelates:
A bis-chelate has very specific characteristics to ensure that the metal has maximum protection. In addition to have a 2:1 ligand to metal ratio, the most important characteristic is that it must have a neutral charge. Bis Chelates have 2 chelate rings. Bis-chelates are formed when 4 atoms connect to the metal in the center. A mono-chelate does not exists. As previously mentioned, a molecule with only one ligand and a metal is a “metal complex”
When the HMTBa-chelated trace mineral molecule reaches the site of mineral absorption in the small intestine, the combined influence of the pH of the unstirred water layer (pH 2) of the intestinal mucosa and the higher binding affinity of the mineral receptor on the intestinal cell membrane breaks the bonds of the molecule, freeing the trace mineral. The free trace mineral and the HMTBa are then absorbed separately across the epithelium of the small intestine for utilisation in the animal.
The HMTBa ligand, a lipophilic organic acid is absorbed by diffusion or by a carrier system and converted to L-methionine by the animal. Biochemical and growth performance experiments have demonstrated that the HMTBa from HMTBa chelated trace minerals has the same methionine value as unchelated HMTBa. Therefore, in all feed formulations, the trace mineral-HMTBa chelate can replace a portion of the supplemental synthetic methionine.
Measuring the Bioavailability of OTM:
Intrinsic, extrinsic, and luminal factors can affect mineral bioavailability (Nelson, 1988; Ashmead, 1993). The variable reports of organic mineral bioavailability in animal systems are likely due to interactions among these factors. Tissue mineral experiments often provide useful data in mineral availability, but these experiments measure only a fraction of the mineral that is taken up by the animal. Minerals are absorbed by the small intestine, and then distributed via the bloodstream to other tissues. Therefore, tissue mineral levels only measure the mineral that is distributed to those particular tissues, and as such may not reflect total mineral uptake. The tissue mineral experiments measure only the amount of mineral that has entered into the particular tissue, rather than the total mineral delivered to that particular tissue. 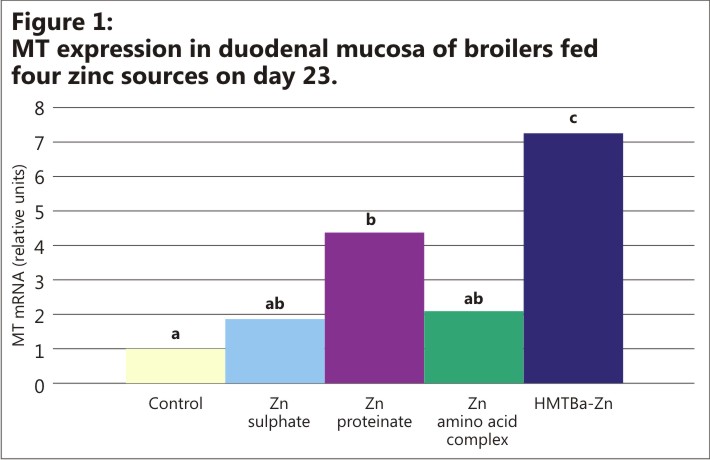 The solution to this problem is to use of biomarkers like Metallothionine (MT) in the animal in the small intestine where minerals are absorbed. Metallothionein’s expression is regulated by Zinc status. When zinc is absorbed by a cell, it must be bound up quickly into protein, because free zinc is toxic. The cell therefore responds to zinc uptake up synthesising MT mRNA (as an intermediate) and then MT protein. The MT protein is then able to bind up to 7 zinc atoms, (for Cu its 10) until it is needed by other enzymes in the cell. Research has shown in many tissues from a wide range of species, MT mRNA and protein expression increase when more zinc is taken up, and decrease when less zinc is taken up. Therefore, metallothionein mRNA or protein expression is often used as an indicator of the zinc status of humans and animals and to evaluate the bioavailability of different zinc sources. 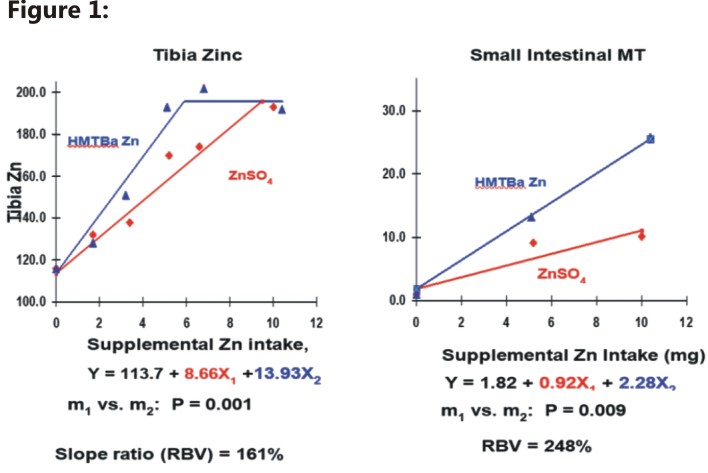 Figure 1 shows an example of using small intestinal metallothionein mRNA expression as an indicator of zinc bioavailability. In this experiment, broilers were fed control diets or diets supplemented with 40 ppm zinc from the indicated sources. Because zinc absorption occurs in the small intestine, differences in metallothionein expression here would be expected to more closely represent relative bioavailability than tissue zinc levels would. Measuring tissue minerals or mineral dependent biomarkers can be the easiest and most straightforward measures to generate a quantitativeestimate ofmineral bioavailability.
It seems likely that some OTMs truly will not be more bioavailable than ITMs, due to their inability to stay chelated or complexed in the lowpH environment of the upper GItract. On other occasions, however, true differences in bioavailability could be masked by experimental design. Using tibia zinc content as the measure of bioavailability, indicated that the bioavailability of zincmethionine relative to zinc sulphateranges from 117% to 206% in broiler chicks, depending on the diet matrix.
A study of Zn-HMTBa performed (Figure 2) on the linear portions of the dose response curves indicated that the zinc from this source was approximately 160% or 250% as available as the zinc from zinc sulphate, depending on the response variable measured (tibia zinc; or the small intestinal expression of the zinc responsive biomarker, metallothionein; respectively).
Less is more – reduce and replace
Many people are using ‘reduce and replace’ – replacing all or some of the ITMs with organic trace minerals (OTMs) to avoid the problem of antagonisms and reduce environmental deposition of trace minerals. A potential advantage of OTMs is that the binding of the organic ligand(s) to the mineral should provide stability of the complex in the upper gastrointestinal system, thereby minimising mineral losses to antagonists and allowing the complex to be delivered to the receptor sites of the small intestine for improved mineral uptake.
Summary:
Only by truly understanding the structure and consistency of a given OTM source and by rigorously investigating its bioavailability through a variety of methods you can be assured of the predictability and consistency of the animal’s responses to OTM supplementation. With new research and extensive commercial experience proving the superior bioavailability of HMTBa chelated trace minerals, you can now formulate to reduce overall supplementation of trace minerals, without compromising (and sometimes increasing) performance while reducing excretion into the environment.
The superior bioavailability of HMTBa-chelated trace minerals helps producers and nutritionists address key production challenges including gut health, nutrition, structural integrity and protection against oxidative stress, which contribute to better control of wet litter syndrome, bone and egg shell strength and footpad dermatitis.
Considering the risk of mineral loss, combined with the profits you might be throwing away, the value is clear. You can’t afford not to re-evaluate your current program and consider the alternative solutions that chelated trace minerals provide.
References are available on request
by Dr. Koushik De, Novus International