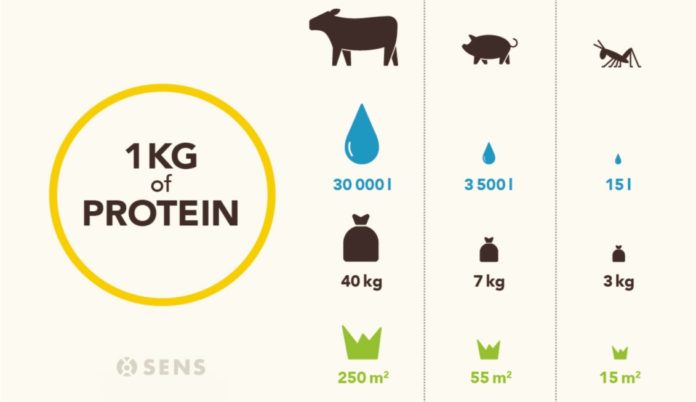 As there is a need for more proteins, there is also a need to reduce emissions that deteriorate climate leads to alternative protein sources.Edible insects emerge as a viable solution which can reduce animal proteins in animal feed.
International Platform of Insects for Food and Feed (IPIFF)is an EU non-profit organisation represents the interests of the insect production sector towards EU policy makers, European stakeholders & citizens. Created in 2012, the association is today representing 54 members.
EU Regulation
The EU regulatory frameworkhas supported the European insect sector to become a leader in terms of innovation – with numerous start-up initiatives that gradually became trustworthy actors in the food and feed chains. A concrete example is the EU authorisation of insect-derived protein in aquaculture feed – which can be incorporated in such products since July 2017.
While the approval represented a boost for the sector, it is hoped that the subsequent authorisation of insect proteins in poultry and swine feed will represent a win-win for both insect producers, who will have access to new markets, as well as for European farmers and the animal feed industry, that will be able to rely on more diverse premium ingredients, in line with the nutritional requirements of chickens and pigs, for example.
In the European Union, farmed insects fall under the category of ‘farmed animals’, which means that the products insects feed on have to comply with the EU feed standards – like any other type of animal feed. Notably, insects may only be fed with materials of vegetal origin or milk, eggs (and their derived products) – not with food waste. Presently, IPIFF members rely on food and farm by-products – secondary materials that are unused or underutilised and that are subsequently transformed into protein, lipids and fertiliser. Therefore, insect farms become a new link in the agri-food chain, revalorising such products and reintroducing precious nutrients into the food chains.In the animal feed sector, the necessity to investigate alternatives that satisfy the nutritional needs of farmed animals – within the planetary boundaries – played a key role in developing sound scientific evidence that confirms the added value of insects in fish, chicken or pig feed. One of the recognised advantages of insects is that they require little resources (such as land, water, etc.), providing nutritious outputs that can be incorporated in the diet of farmed animals.
In a recent report published by Barclays, it is stated that the expansion of agriculture by 2050 would require land equivalent to two times the size of India. This clearly shows the urgency to develop alternative farming methods – that shall address the growing demand for food. According to association members’ estimations, the production of insect protein in Europe will prove to be beneficial in reducing the imports of high-protein feed materials – saving an area the size of Belgium by 2030 (source – IPIFF Vision Paper). Of course, these estimations rely on current production practices and methods – further research and innovations will help to develop more optimised and efficient processes.
Source: European Interest