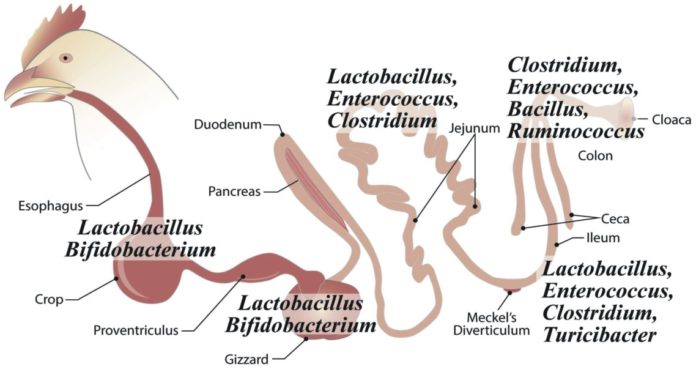 Global poultry probiotic ingredients market is expected to grow from USD 64.33 Million in 2017 to USD 127.32 Million by 2025 at a CAGR of 8.9% during the forecast period from 2018-2025. The North America region is dominating the market due to increasing consumer consciousness towards consuming high protein products which may drive the overall market. Favorable regulations by FDA regarding GRAS approval for these products along with antibiotics ban in U.S is likely to contribute to the industry growth.
Asia Pacific poultry probiotic ingredients market was estimated about USD 25.4 Million in the year 2017. The regional growth is mainly attributed due to rising meat utilization. In countries like India, poultry is the most organized sector. It is the third-largest egg producer in the world after China and U.S. and the fourth-largest chicken producer in the world after China, Brazil and the U.S. The production of the broiler meat was increased to 4.2 Million Tons in the country in year 2016. The demand for processed meat is growing at a rate of 15-20 percent every year. Multiple factors like rising health consciousness amongst the population, more disposable income, acceptance by all religions etc. are boosting the market growth.
Poultry Probiotic Ingredients Market by Product (Lactobacilli, Bifidobacterium, Streptococcus, Bacillus, Others), Application, Region, Global Industry Analysis, Market Size, Share, Growth, Trends, and Forecast 2018 to 2025 are covered in the report.
Leaders in the industry Novus, Biomin, Evonik Industries, DuPont, Kemin Industries, Organica Biotech, Prowell, Neospark and DSM among others which are offering greater opportunities and major players are continuously focused on new product developments and venture capital investments to obtain market share. For instance, in January 2016, Chr. Hansen to acquire Nutritional Physiology Company and expand its business in probiotics to the livestock industry
The product segment is classified into lactobacilli, Bifidobacterium, Streptococcus, and others. The lactobacilli segment is dominating the market and valued around USD 25.21 Million in 2017. Rise in egg consumption among consumers for high protein intake may stimulate productivity growth. These are used in layers to enhance egg quality and provide a favorable environment to eggs for proper growth. The application segment is segmented into broilers, layers, turkeys, breeders, and chicks & poults. The broilers segment dominated the market with the highest share of 41.40% in 2017. The probioticsis broadly used as an alternative for antibiotics growth promoter and to gain weight in broiler chicken which may drive the market growth. It also aids in tuning intestinal environment and digestive function in broilers, which should stimulate the industry growth.
High consumption of meat is a major factor propelling the growth of the market. Growing demand of well-kept yards and backyard beautification activities across the globe is contributing to the market expansion. Standardization issue have restrained the market growth. However, favourable regulatory policies in regards to the association of probiotics in animal feed may drive the business development in coming years.
For further information please visit fiormarkets.com