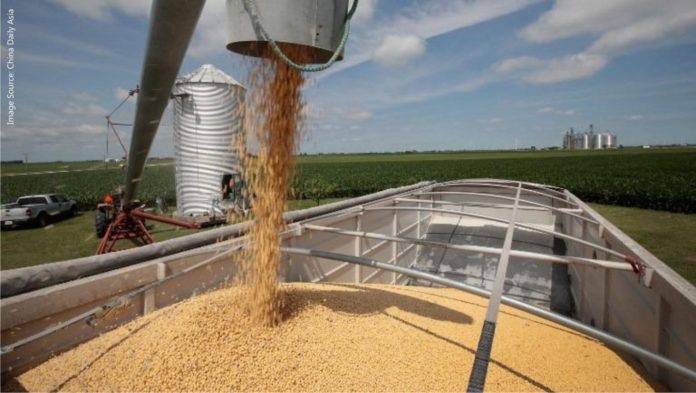 China could reduce imports of soybeans by more than 10 million metric tons this year – down more than 10 percent from last year – because of domestic production and the promotion of soybean substitutes, analysts said.
Because of its low cost, farmers nationwide have long relied on imported soybean meal, the remains of the plant after oil is extracted, to supplement animal feed.
However, as the cost of imported soybeans and soybean meal has increased as a result of trade frictions between China and the United States, alternatives such as rapeseed meal and cottonseed meal are becoming more economical, according to Li Qiang, chief adviser at commodities consultant Shanghai JC Intelligence.
Li predicted that China will increase imports of sunflower meal, palm kernel meal and rapeseed this year, potentially cutting demand for imported soybeans by about 6 million tons.
In addition, the widespread promotion of a low-protein animal feed with added amino acid could reduce demand for soybean meal by up to 7 percent, equal to a further 5 million tons of imports, according to Zhang Haitao, chief technical supervisor at Guangdong Evergreen Feed Industry Co, based in Zhanjiang, Guangdong province.
Yin Yulong, a member of the Chinese Academy of Engineering, explained that the animal feed has 3 percent less protein but four extra kinds of amino acids.
Research has shown no decline in the production and quality of pork from pigs raised on the feed, he said.
More than 80 percent of the soybeans consumed in China are imported. Last year alone, the country imported more than 95 million tons worth about $40 billion, according to the General Administration of Customs. Brazil and the US are the top two suppliers, it said.
Experts have predicted soybean prices in China will rise in the short term due to the trade frictions. China has imposed additional tariffs on soybean imports from the US.
However, Zhong Funing, a professor of agricultural economics at Nanjing Agricultural University, said the Chinese public needn’t worry about soybean supplies.
“There is a surplus worldwide,” he said, noting that China’s soybean imports from the US have decreased over the past few years, with Brazil now the biggest source.
In addition to promoting soybean meal substitutes and diversifying its import sources, China has also been increasing domestic production, the Ministry of Agriculture and Rural Affairs said in May.
It said the country was to increase its soybean farms by 667,000 hectares this year.