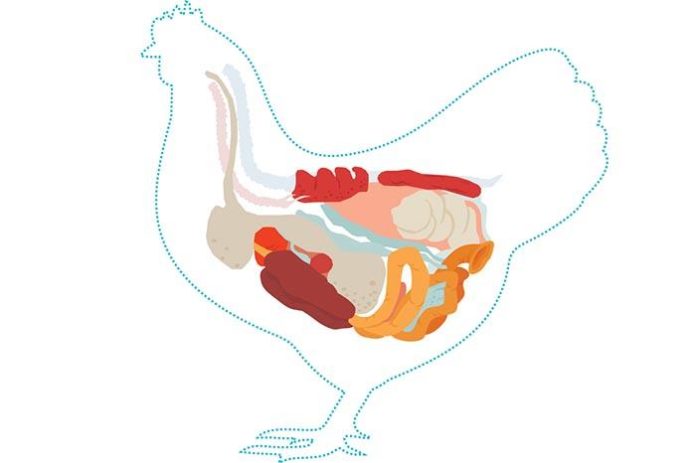 INTRODUCTION
Improvement of genetic potential in modern broiler breeds led them to higher body weight gain, minimum feed conversion ratio and reduced mortality. This fast growth rate is often directly linked with digestive problems, such as bacterial enteritis (BE) or dysbacteriosis and even necrotic enteritis (NE). Feed conversion ratio (FCR) plays a vital role in deciding the economics of commercial broiler farming. There are several factors which can influence FCR by affecting the intestinal integrity in broiler chicken. Appearance of feces can give an idea of the condition of birds’ intestinal health. Necrotic enteritis was first reported in the year 1961 and has since been established as an economically significant disease of poultry. Clostridium perfringens, an organism that is a regular inhabitant of poultry hind gut, is the causative agent of disease in poultry. The known predisposing factors for NE are high protein and energy diets, coccidiosis infection, sudden change in feed, hygiene or shed management, stocking density and immunosuppression.The subclinical form of it has been a silent profit killer for poultry farmers since it negatively impacts body weight and feed conversion ratio  in birds.
Intestinal health is very essential for economically viable broiler production. Due to the rapid growth of unconventional feed raw materials and excessive usage of antibiotics, the intestinal health of broiler chickens is compromised in South Asian countries. Coccidiosis and necrotic enteritis are the two major and primary diseases for intestinal health upset. Apart from these two, one of the widespread syndromes of intestinal health in broilers without causing mortality is referred as Dysbacteriosis or Nonspecific bacterial enteritis. This condition is also called as small intestinal bacterial overgrowth (SIBO) resulting in undigested feed particles in the droppings, diarrhea and wet litter which in turn causes poor performance.
Macroscopic observation of the intestinal tract of broilers affected with dysbacteriosis and coccidiosis was analyzed. Commercial broilers were given a macroscopic dysbacteriosis and coccidiosis score by experienced veterinarians during necropsy. Bacillus subtilis PB6, an active microbial can effectively maintain the intestinal health by targeted action on Clostridium perfringens and promoting the growth of beneficial bacteria. Present study compares the efficacy of Bacillus subtilis PB6 during the year 2017 and 2018 through out South Asian countries.
This study was initiated for both Bacillus subtilis PB6  users and nonusers of the South Asian market. Assesment in the occurrence of Dysbacteriosis and Coccidiosis of South Asian broiler farms was done and studied the effect of Bacillus subtilis PB6 on controlling Dysbacteriosis and in relation with coccidiosis challenge was observed.
METHOD
The lesion scoring procedure for Coccidiosis was followed by the method of Johnson and Reid. Whereas,for Dysbacteriosis, the Kemin technical team developed a scoring system in reference with a macroscopic scoring method developed by Teirlynck, et al. were used for this study.
During this study, overall 208 and 224 broiler houses were analyzed from 47 broiler producers across South Asia during the years 2017 and 2018 respectively. From each house, 3 to 5 healthy birds were sacrificed through cervical dislocation by an experienced veterinarian and immediately necropsied. Intestinal parameters were scored for the intestinal lesion scorings. The broiler age range selected for this study was 15 to 45 days with an average age of 26 days based on the prevalence age and occurrence of Coccidiosis and Dysbacteriosis.
Results & Discussion
The intestinal health monitoring of 47 broiler integrations through out South Asia resulted in an average Dysbacteriosis score of 0.63 in PB6 users which was significantly lower (P≤0.05) than non PB6 users which was 1.00 in 2017. In 2018, the Dysbacteriosis score in PB6 users was 0.66 that was significantly lower (P≤0.05) than the non PB6 users which was 1.10. Overall, the average coccidiosis score was more than one in both 2017 & 2018 and there was no significant difference (P≥0.05) between Bacillus subtilis PB6 users and non-users. There were non significant difference (P≥0.05) in coccidiosis lesion scoring of Bacillus subtilis PB6 users and nonusers. Based on the observations during the year 2017 and 2018, there was no difference in the prevalence of coccidiosis, but a significant reduction (P≤0.05) of dysbacteriosis score in PB6 users was noted than PB6 non-users continuously. 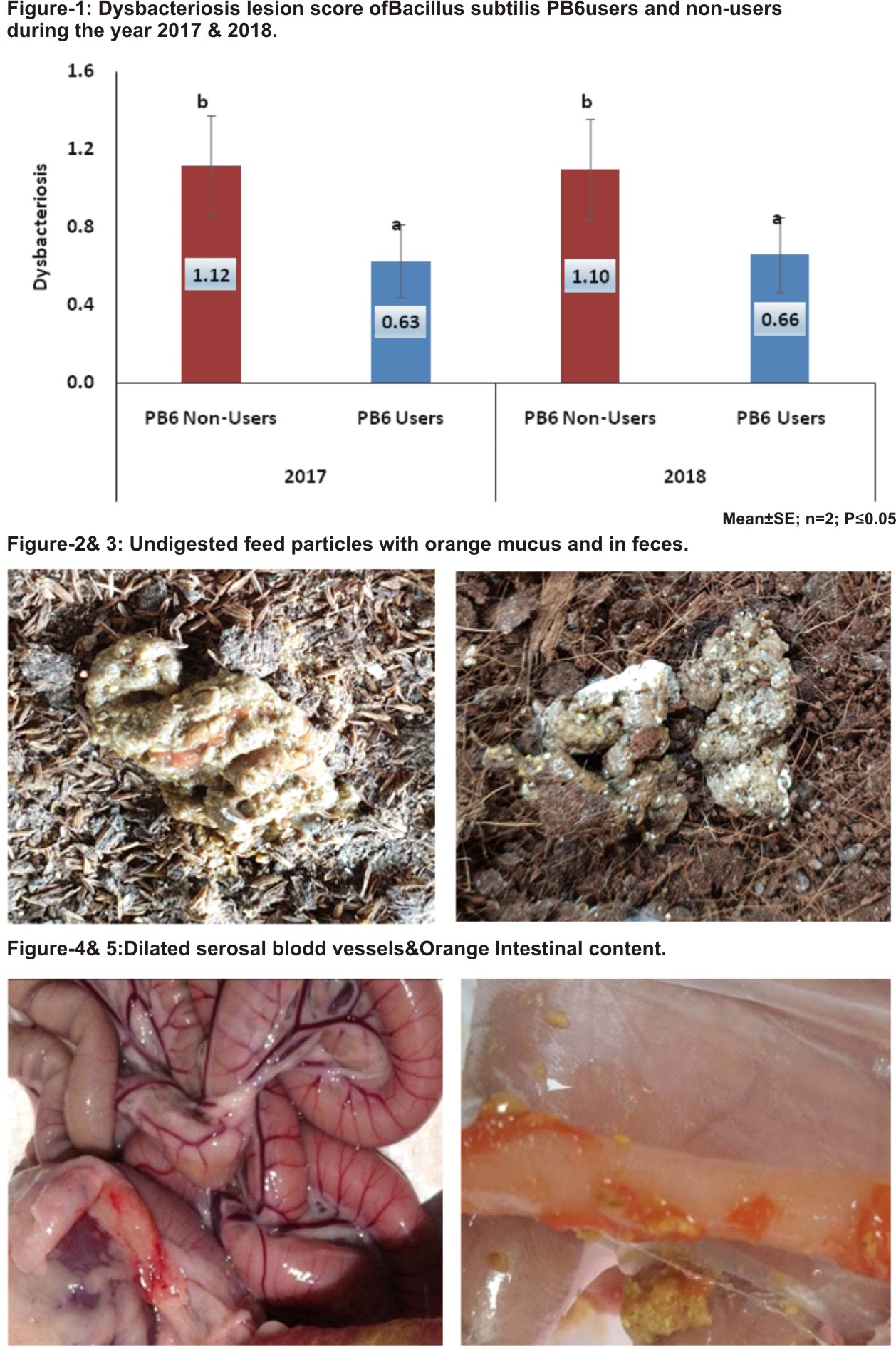 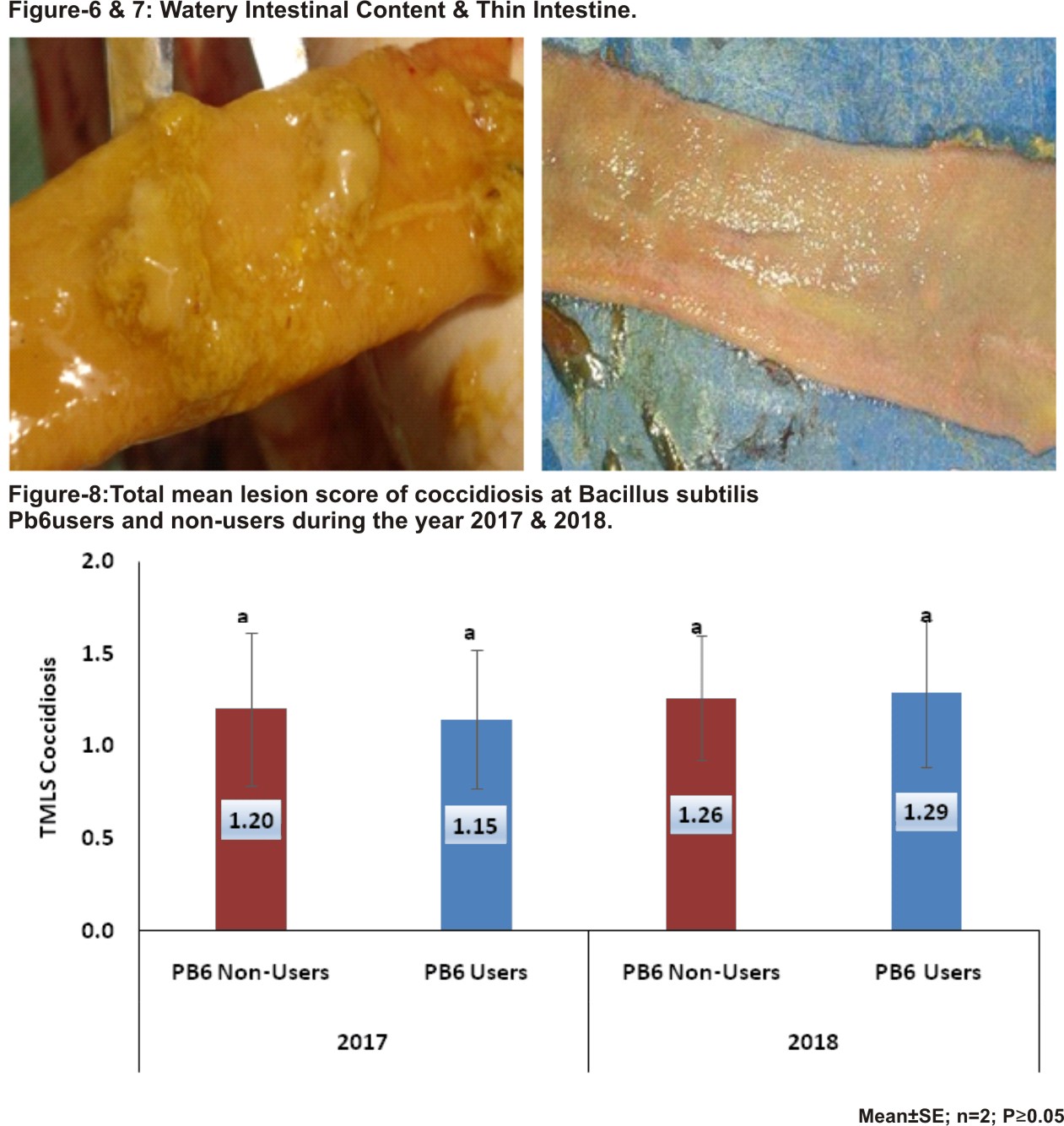 Conclusion
This study revealed that Bacillus subtilis PB6 is a complete solution for controlling dysbacteriosis, despite the adverse conditions including coccidiosis challenge. Bacillus subtilis PB6 can effectively maintain the intestinal health by inhibiting action on Clostridium perfringens and promoting the growth of beneficial bacteria. Apart from controlling the effect of necrotic enteritis, Bacillus subtilis PB6 has improved the intestinal health by improving the gut health and minimizing dybacteriosis issues in broilers during the year 2017 and 2018 continuously.
by Venket M Shelke, Saravanan Sankaran and Chandrasekar S
Kemin Industries South Asia Pvt. Ltd. 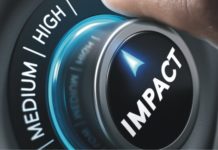 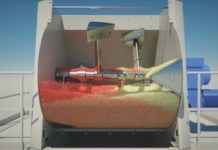 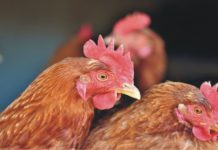