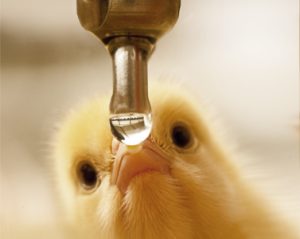 Assessment of water quality and its importance in broiler birds
Water constitutes about 55% to 75% of body weight in poultry birds and is considered as one of the most important nutrients for their growth and development. On an average, birds consume twice the amount of water as feed on weight basis. Water quality challenges can have detrimental effects on the normal physiology of the birds resulting in reduced performance.
Drinking water for poultry arrives from different sources posing a serious threat to the quality of water due to the presence of a wide variety of bacterial contaminants, inorganic ions or other pollutants, which directly or indirectly affect the overall performance and health of birds. Hence, maintaining and providing good quality water is essential for the efficient development of birds in terms of health and nutrition.
Water quality is evaluated by several criteria such as total alkalinity, hardness, total dissolved solids (TDS), etc., but the primary and most important parameters are pH, hardness and microbiological analysis. Ideally, pH between 6.5 and 6.8, hardness between 60 – 180 ppm, and microbial count of less than 1000 colonies forming units (cfu) is optimum for poultry drinking water.

Variations in quality of drinking water
Water samples sourced from different places were assessed for pH and hardness, and the results are shown in Figure 1. Most of the samples showed higher pH and hardness suggesting the need to use acidifiers.
Role of acidifiers in improving drinking water quality
The addition of acidifiers in drinking water is one of the approaches for water quality optimization. In recent years, acidification of water to improve the water quality has been extensively studied. It was observed that the addition of organic and inorganic acids to drinking water offered several benefits like reduction of microbial load, regulation of gut micro flora, improvement in the digestibility of proteins and amino acids, better nutrient absorption and feed utilization, and reduction in the pH of water. Kemin Industries has launched AcidLAC™ azure, which is a blend of organic and inorganic acids that optimizes the quality of water effectively even in different level of hardness.
AcidLAC™ azure– Efficacy in varying hardness
Hardness is typically a measure of ions, which are classified as temporary hardness due to carbonates, and permanent hardness due to non-carbonates of calcium and magnesium ions. In addition to calcium and magnesium ions in natural hard water, presence of ions such as zinc, manganese, iron, strontium and aluminum also contributes to the additional hardness. Also, the water varies in hardness and pH from place to place. Generally, water with high hardness resists the pH changes and the product which has best mixture of acids helps in overcoming this challenge. Water samples analysis was done to study the efficacy of AcidLAC™ azure in reducing the pH of different water types at varying hardness.
1. Effect of AcidLAC™ azure in reducing the pH of natural hard water
In natural hard water obtained from poultry farm of 500 ppm hardness and TDS of 1030 ppm, AcidLAC™ azure was able to reduce the pH to an acceptable level at the dose of 0.1 ml/L (Fig. 2) 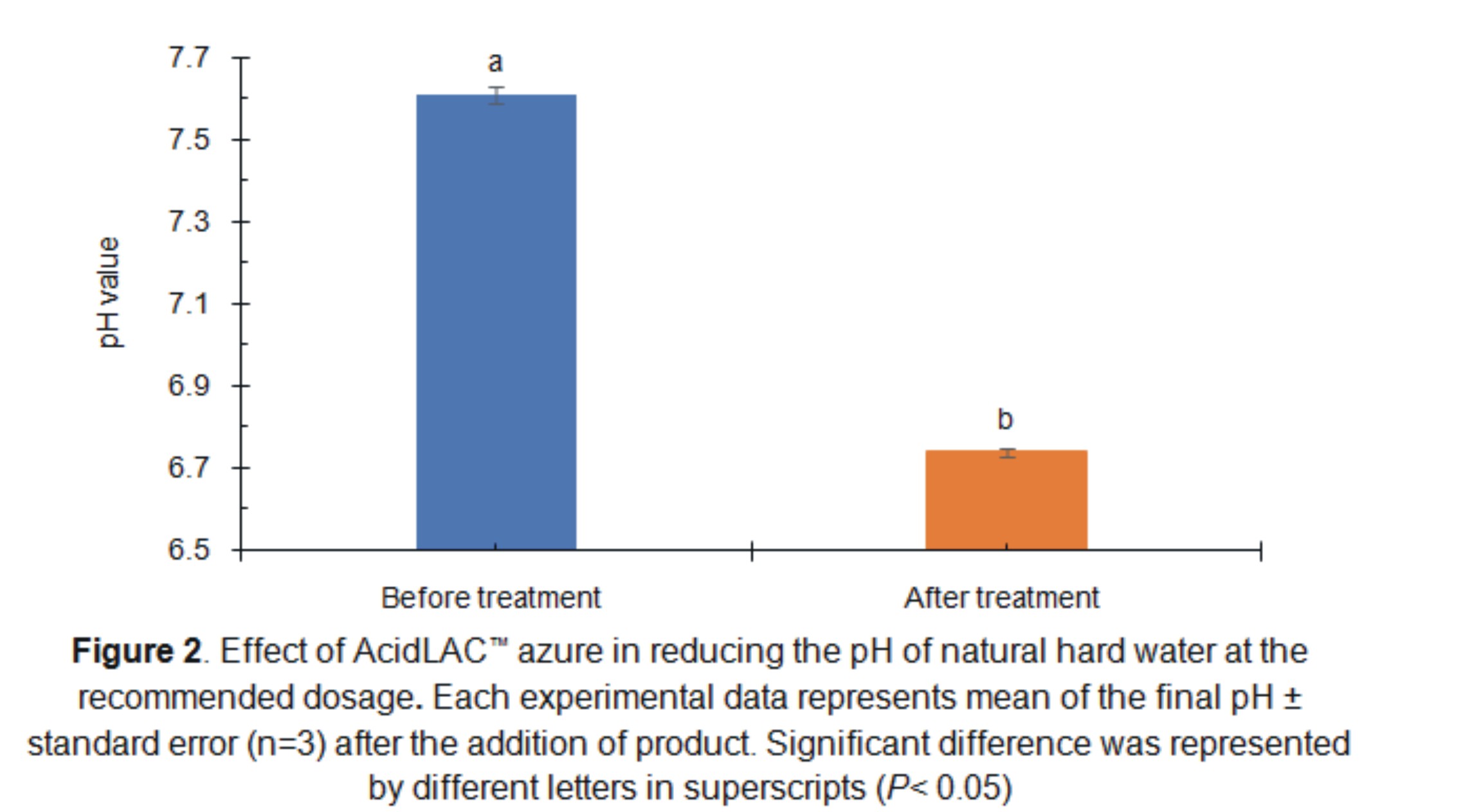 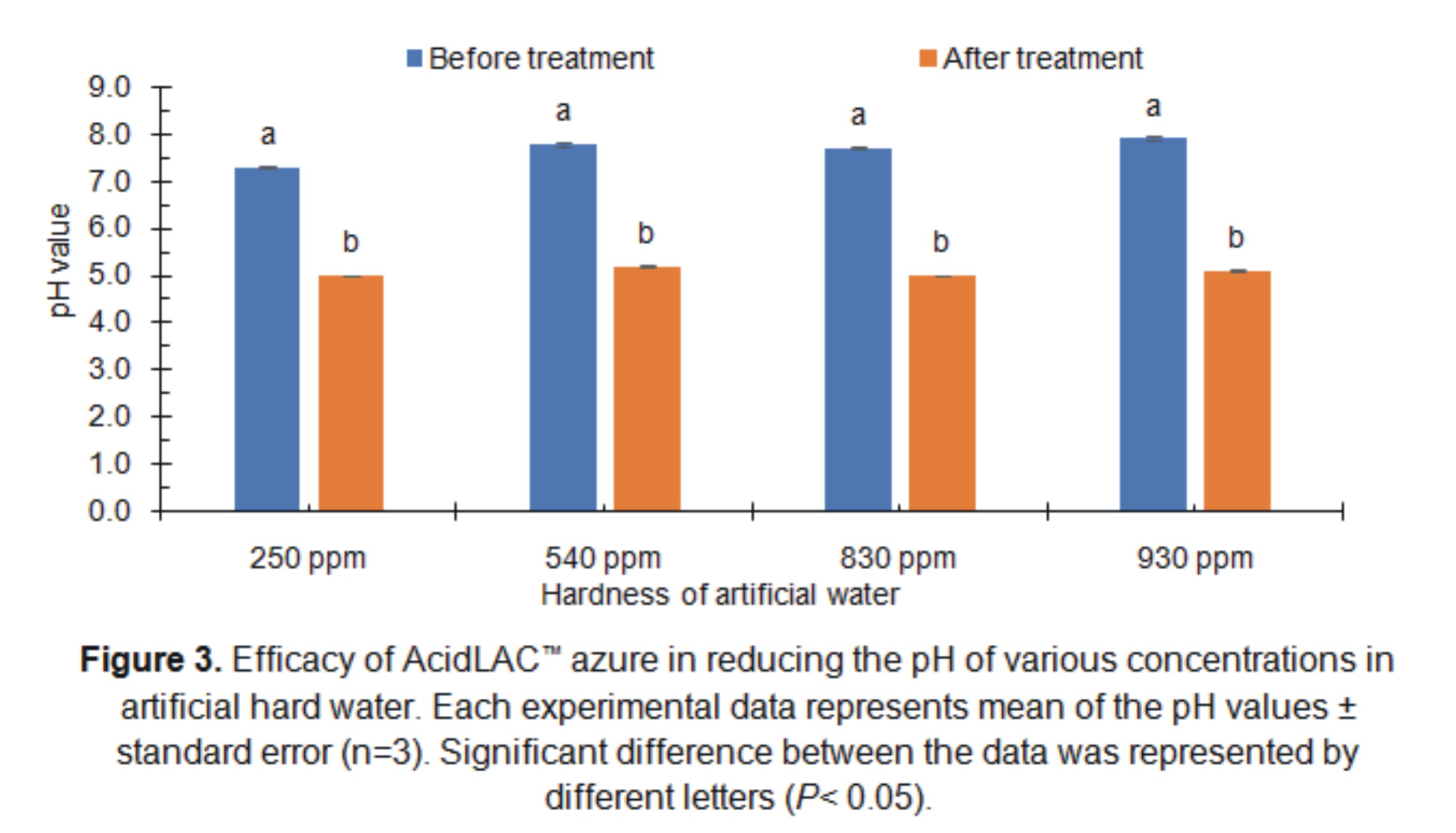 The results showed that AcidLAC™ azure was able to effectively reduce the pH of artificial hard water even at high hardness to an optimum pH at lower dose of 0.1 ml/L.
AcidLAC™ azure– Efficacy against pathogens
The antimicrobial efficacy of AcidLAC™ azure was tested in vitro by the zone of inhibition studies against Gram positive bacteria, Staphylococcus aureus ATCC 25923 and Pseudomonas aeruginosa ATCC 27853, and Gram negative bacteria Escherichia coli MTCC 443 and Salmonella enterica MTCC 9844, and fungal species of Aspergillus niger MTCC282 (Fig. 4). AcidLAC™ azure showed good inhibition against these tested microbes. 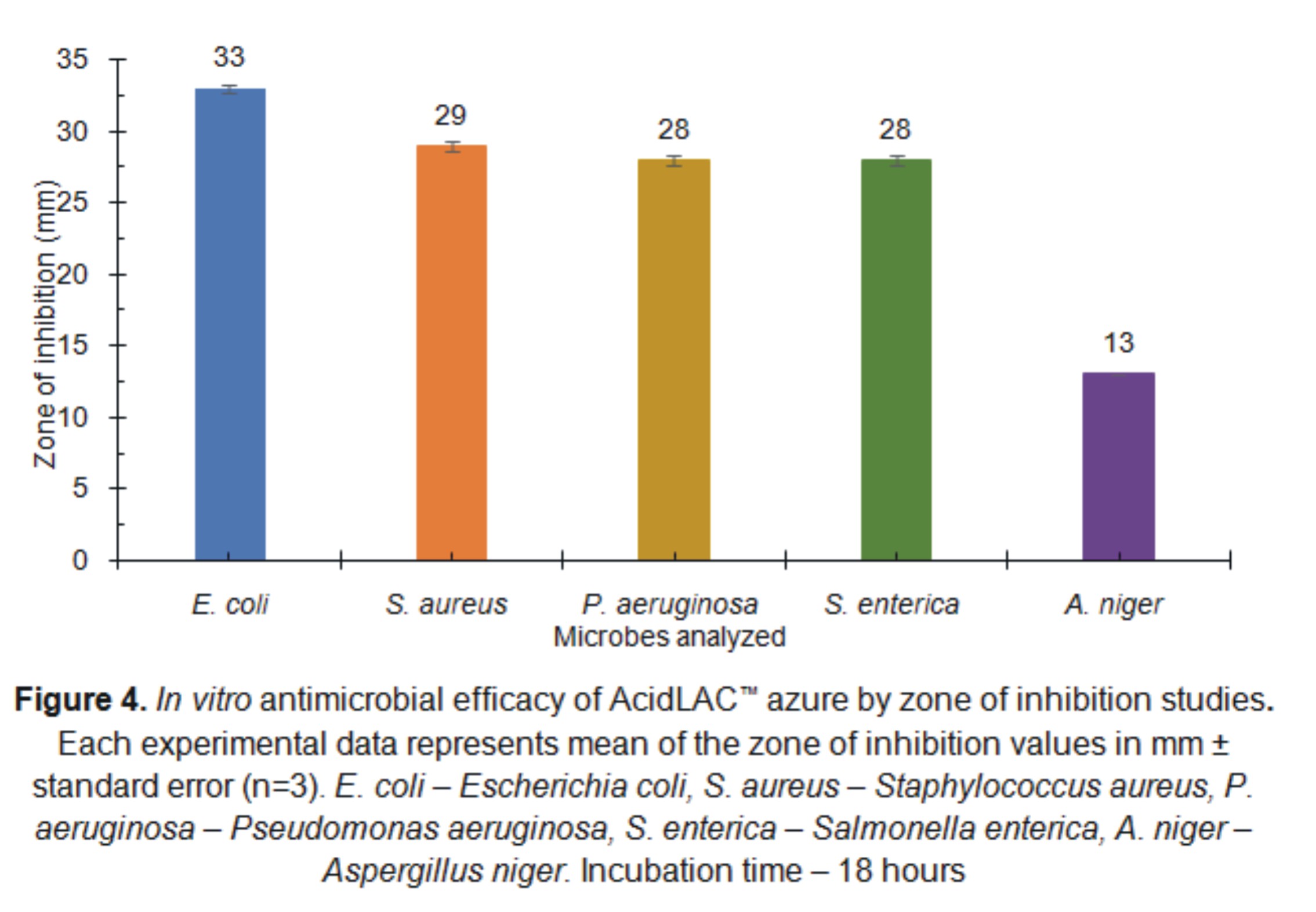 AcidLAC™ azure–Enhancing the performance of broiler birds
The above results suggested that supplementation of AcidLAC™ azure in drinking water improved the quality of water by maintaining the optimal pH and in the control of microbes. The impact of this improved water quality on the performance of broiler chickens was also evaluated through in vivo trial by providing the birds with drinking water at 900 ppm hardness treated with AcidLAC™ azure for a period of 35 days.
The in vivo trial was conducted with a total of 192 one day old Cobb 400 male broiler chickens, which were randomly allocated into two groups, namely the control and AcidLAC™ azure treated group. Each group had eight replicates housed with 12 birds in each replicate.
In the AcidLAC™ azure treated group, water required for each replicate group was collected and the product was added to the collected water at 0.15 mL/L of drinking water. This water was then placed in each pen in bell type drinker. The same procedure was repeated for every 12 hours every day throughout the trial period.
Corn – soya diets in the mash form was used for the trial. The compositions were based on the requirements for the pre starter, starter and finisher stage of broiler birds. The parameters such as body weight gain, feed intake, feed conversion ratio (FCR) and mortality were monitored throughout the trial on a weekly basis.
At the end of five weeks, no significant difference (P < 0.05) was seen in the body weight of birds between the control and treatment group. However, there was a significant difference (P < 0.05) in feed intake between the groups, which showed a significant improvement in the FCR of AcidLAC™ azure treated group (Fig. 5). This improvement in FCR resulted in an ROI of 3:1 in the AcidLAC™ azure treated group. The European Production Efficiency Factor (EPEF) of control and treatment groups at the end of 5 weeks was also calculated using average weight of birds, livability and FCR, and the AcidLAC™ azure treated group showed efficiency of 436.24, which was better than the control group (432.87). 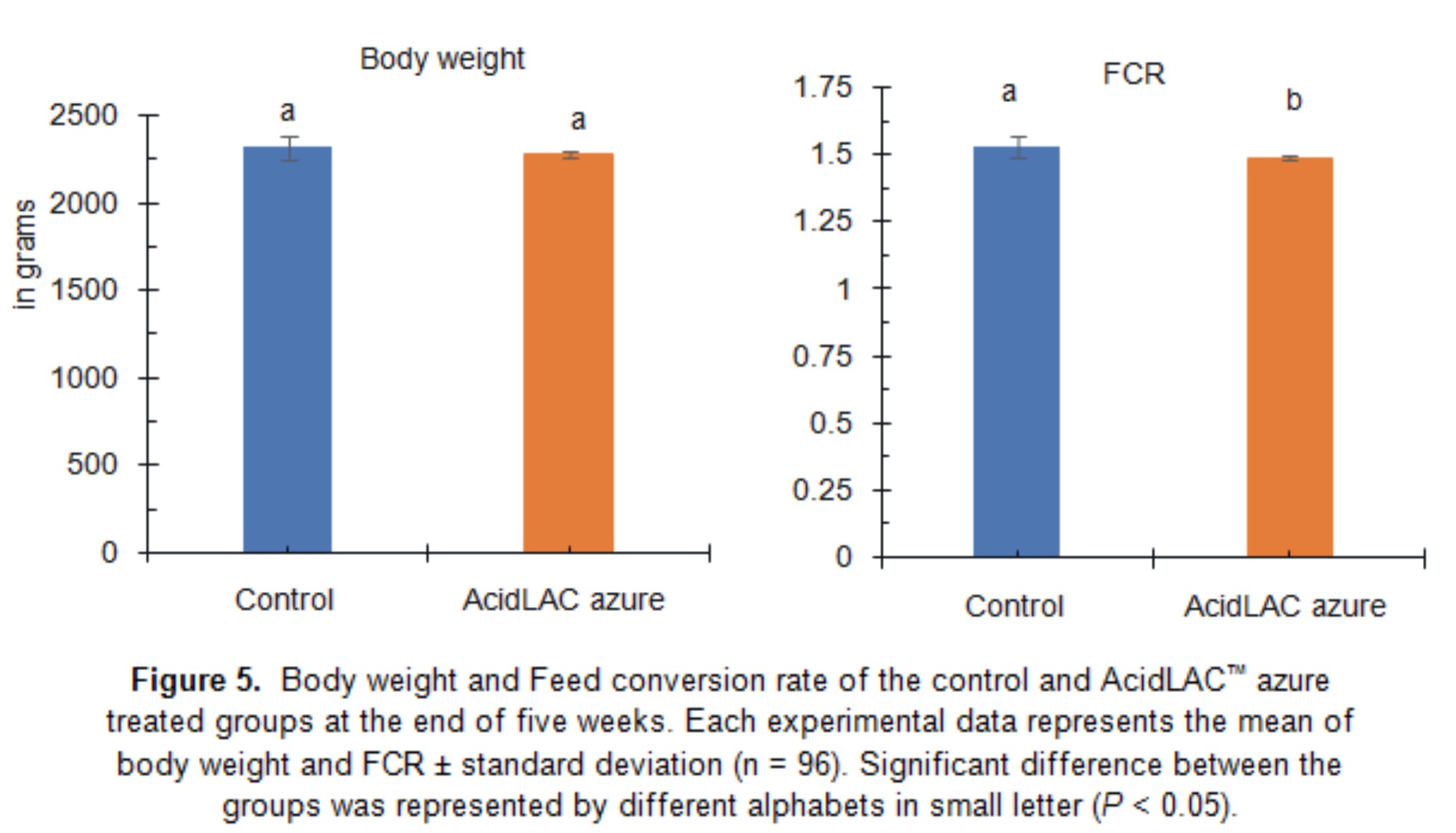 Conclusion
Maintaining and providing good quality water to birds is important for their overall health and nutrition, which in turn results in an improved performance and growth. However, in Indian poultry drinking water, hardness and pH of water samples are often found to be higher than the acceptable limits.
AcidLAC™ azure was effective in reducing the pH to an optimal level in natural and artificial hard water and also showed an inhibition against bacterial and fungal microbes.
The beneficial effect of AcidLAC™ azure in improving the quality of water was noticed in the performance of broiler birds, where, a 4-points improvement in FCR was observed with a return of investment of 3:1 and European Production Efficiency Factory difference of 3.37 over the control group.
Note: References available on request.
by Nabila Fathima*, Swati Karki#, and Rajendra Moorthy*
*- Research & Development; #-Marketing;
Kemin Industries South Asia Pvt. Ltd.