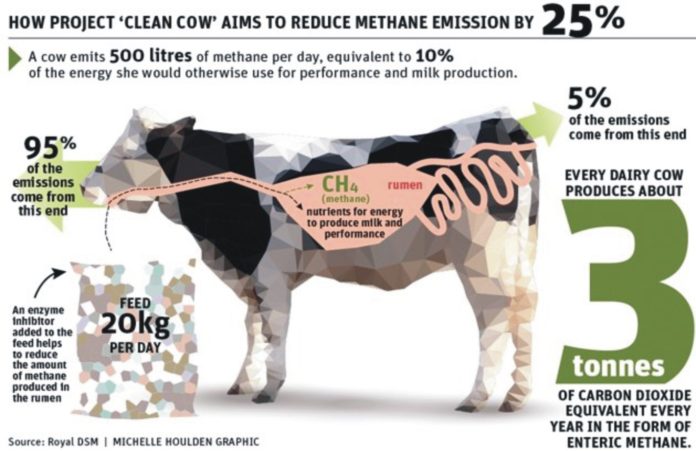 DSM has applied to European regulators for authorization to sell a cattle feed additive made from 3-nitrooxypropanol (3-NOP), which can reduce emissions of the greenhouse gas methane from dairy cows by 30%. DSM hopes to launch the product in the European Union by early 2021, followed by registrations in other
Widespread use of the additive could have a significant impact on greenhouse gas emissions. Cows typically release 70–120 kg of methane each year, mostly by burping. Globally, livestock accounts for about 15% of all greenhouse gas emissions, and more than half of this comes from cattle.
A quarter teaspoon of 3-NOP per cow per day, DSM says, is enough to inhibit the formation of methyl coenzyme-M reductase, an enzyme used by methane-generating microbes present in a cow’s digestive system. These microbes produce methane when they help cows digest grass and other fiber-rich foods. Once consumed, 3-NOP is broken down into compounds already naturally present in the cow’s stomach, DSM says. The additive’s efficacy has been confirmed in 26 peer-reviewed journals, the firm claims.
“Our science-based solution has the potential to be a real game changer in the global effort to reduce the climate impact of the foods we know and love,” says Mark van Nieuwland, program director at DSM.
DSM developed the additive over a decade in collaboration with Pennsylvania State University researchers, led by Alexander N. Hristov. In 2015, researchers tested 3-NOP on 48 Holstein dairy cows over a 12-week period and found the compound reduced methane emissions by 30%.
DSM has pegged the market potential of the additive at as high as $2 billion per year, according to the investment firm Jefferies. 3-NOP will compete with a host of other methane-reducing additives including flax seeds, linseeds, and a blend of garlic and citrus extracts.
While reducing methane emissions from cows has no direct benefit for farmers, 3-NOP does reduce feed costs by 3-5%. This is because about 10% of a cow’s energy is consumed in generating methane. Hristov’s 2015 study concluded that, on average, the body weight gain of 3-NOP-treated cows was 80% greater than control cows during the 12-week experiment. Reducing methane emissions increases the value of a cow by $33 to $55, Jefferies says. Not all feed additives designed to reduce environmental impact bring a financial benefit. The animal health company Elanco has developed Experior (lubabegron), a beta-adrenergic agonist/antagonist drug that reduces ammonia in beef cattle manure and urine. When the US Food and Drug Administration approved Experior in November 2018, it said it found no evidence that the drug makes cattle put on weight. Elanco has yet to launch Experior.